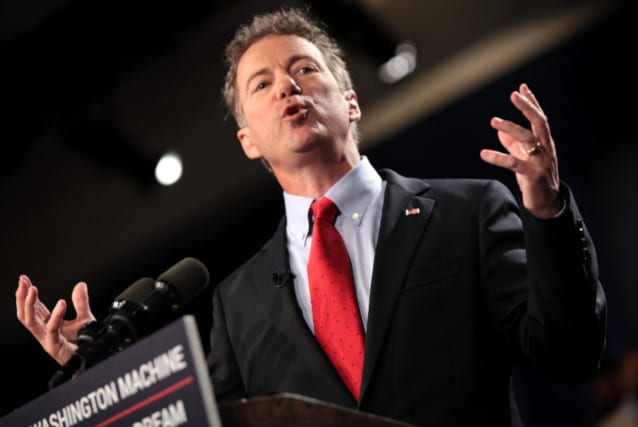 (Gateway Pundit) – In an interview with The Gateway Pundit about the impeachment effort on Wednesday, Senator Rand Paul warned his colleagues who plan to let the Democrats choose witnesses that they will lose their reelections.

Senator Paul, who has seemingly been leading the charge to defend the president during this process, also explained that he would vote for Rep. Adam Schiff and Speaker Nancy Pelosi to have to testify, especially since Schiff has a staff member who is friends with the whistleblower — potentially making him a material witness.

Additionally, Sen. Paul stated that he wants the impeachment process to be over as soon as possible, but that if the Democrats are allowed to call witnesses, President Trump must be afforded the same right.

When asked if any other Republicans have been supportive of Sen. Paul’s assertion that he wants to call in the whistleblower and Hunter Biden to testify, he asserted that there are a lot of people who do, but that they have been quiet.

“There’s a lot of people who are quiet, so I’ve been kind of loud,” Sen. Paul said. “My goal in this is to be done with the impeachment as soon as possible, and probably the best way to do that is actually no witnesses — but, if we’re going to have witnesses we should have witnesses from both sides.

In our interview, Sen. Paul warned that his Republican colleagues may be in trouble when they go up for re-election if they defy the president and allow Democrats to run amok, like they did in the House.

“What I keep trying to convince my colleagues, particularly the ones that might vote to allow the witnesses that the Democrats want to call, is that if they do that and they don’t vote to allow the president to bring his witnesses in, I think the Republican base and Trump supporters are going to be very very unhappy with them. I think it will have electoral consequences — which is sort of my way of saying that maybe they should reconsider having any witnesses at all,” Sen. Paul said. “My hope is some will reconsider and we will just be done with one vote.”

Senate Majority Leader Mitch McConnell has said that each witness will have to be approved by a majority of 51 senators — something unlikely to work in Trump’s favor. This had lead to Sen. Paul raising an alarm that only those who hate the president will obtain the necessary majority vote.

Sen. Paul explained that if there does end up being a vote for each individual witness, which could potentially be dozens, he believes that only the ones who are antagonistic to the president will get through. This means that “Hunter Biden, Joe Biden and the whistleblower may not pass a majority vote.” He said that if this is how witnesses are decided, the senate will end up with a situation like the House did — a lopsided witness list that would be mostly people hostile to the president.

When asked if he had any other specific witnesses in mind that he was looking to hear, besides Hunter Biden and the whistleblower, Sen. Paul said that “if they end up approving witnesses like Bolton, who I think are harmful, I will insist on a motion that says the president should get to call all witnesses that he or his team deem to be necessary to his defense.”

“I don’t want to limit it, I’m not his lawyer, I don’t want to tell him who he has to call — I’m just going to say anyone. ‘Anyone’ includes people he has mentioned, like Hunter Biden and Joe Biden,” Sen. Paul said.

The Kentucky senator explained that evidence of Biden’s corruption should be viewed as part of the process.

“The evidence should be presented for their corruption. I think the evidence is pretty damning. The mainstream media just passes over that and says ‘oh well, it’s already been decided there’s no corruption and nothing to see here’, but in reality, most Americans hear that some politician’s son was being paid $50,000 a month and they smell corruption from a mile away.”

“I also think the whistleblower should come in, and the main reason for that is he worked for President Obama, he worked for Joe Biden, he was there when Hunter Biden was receiving this money. My understanding is some of Biden’s aides told him at the time that it was a conflict of interest and he shouldn’t be letting his son do this. The whistleblower ought to be asked ‘what was your opinion then?’”

Sen. Paul explained that “it might well turn out that the whistleblower had an axe to grind with President Trump, but seemed to look the other way when it was Hunter Biden and this conflict of interest happening right before his very eyes. I think that would be an important piece of testimony with regard to his motivations.”

Recently, Sen. Paul was subject to backlash from the mainstream media and Democrats over his call for the whistleblower to come forward. The criticism of his comments were so severe that he questions whether or not there would be enough votes in the senate to compel his testimony.

“As you know, people kind of squawked when I said the whistleblower should come forward, so you can see how that may or may not get a majority of people to vote for it,” Sen. Paul explained. “If they aren’t going to let the president call who he wants, then we shouldn’t have any witnesses,” he reiterated.

President Trump has called for Speaker Nancy Pelosi and Rep. Adam Schiff to testify, something which Sen. Paul told TGP that he would support.

“I want the president to call whoever he wants, now, whether there will be a majority of people who will vote for that, I don’t know. I’ll vote for that,” Sen. Paul said of Schiff and Pelosi.

“Schiff made himself sort of a material witness in the sense that there were reports that one of his staff members is friends with the whistleblower and there was some discussion leading up to this. It’s almost as if this was a planned cabal between Schiff’s staff and this whistleblower,” Sen. Paul said.

“So, yeah, Schiff should be asked about that and his staff should be asked about that, to tell you the truth. They should be asked what kind of communication they had with the whistleblower, when they started, if they have any text messages between themselves and the whistleblower. Maybe their texts look like Peter Strzok’s messages to Lisa Page,” Sen. Paul laughed. “That would be interesting to know, if there was that degree of animus towards the president. Also, the whistleblower, who knows, he’s in government employment — has he been going back and forth with all his colleagues talking about bringing the president down? His lawyer has. He tweeted one week after President Trump was sworn in that ‘now is the time for a coup.’”

Asked about what he believes is the motivation for his Republican colleagues who are defecting on the issue, Sen. Paul said that some of them think it would be a “distraction” and an “uncontrollable scenario with a lack of decorum.”

“That’s fine,” he said. “If they think that, then let’s have no witnesses. You can’t just have witnesses for one side and that is the point I am going to keep making both publicly and privately. It’s not fair to the president.”

“I also think there will be a political price to pay for this, even for Republicans running in purple states, there are strong pro-Trump presences in every purple state. It may not be 50% of the vote, but it’s a third of the vote or more. My guess is that those voters will not be too happy with the Republicans who vote to allow witnesses for the Democrats, but sits there and watches as witnesses the president would like to bring get voted down. I keep telling them it isn’t a threat coming from me, it’s me looking at the politics of this and saying look — you will lose your election.”

Sen. Paul concluded that he will continue to lead this fight and that his colleagues who ignore his advice may regret it when they face the consequences later.

“This is a big deal, I don’t usually lecture my colleagues, but they need to understand that they cannot win an election if they become estranged from the Trump base or Republican base of the party,” he said.