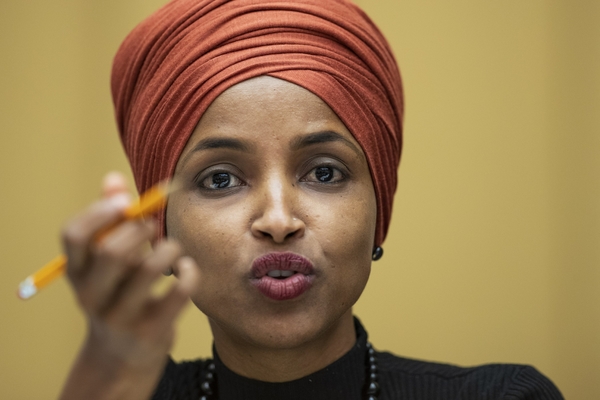 (breitbart) – Rep. Lee Zeldin (R-NY) is calling for Rep. Ilhan Omar (D-MN) to be removed from the House Foreign Affairs Committee after Omar on Monday compared the U.S. and Israel to the Palestinian Hamas terrorist group.

Zeldin, a Jewish Republican, issued the call Wednesday evening after 12 of Omar’s Democrat colleagues publicly condemned her for making the comparison.

“Ilhan Omar must be removed from the House Foreign Affairs Committee. She should have never been appointed to this Committee in the first place,” he wrote on social media:

Omar, who, as Breitbart News’s Joel Pollak has reported, is “staunchly anti-Israel, and has a history of antisemitic rhetoric,” said Monday the U.S. “must have the same level of accountability and justice for all victims of crimes against humanity. We have seen unthinkable atrocities committed by the U.S., Hamas, Israel, Afghanistan, and the Taliban.”

After Omar’s Democrat colleagues openly chastised her for the remark, the Minnesota Democrat issued a statement calling their move “shameful” and accusing them of using “islamophobic tropes” against her. She claimed her initial comments were specifically about cases under investigation by the International Criminal Court (ICC):

While Republican House leaders have not publicly expressed interest in Omar’s committee removal, they were staunchly opposed to her initial appointment to the committee. Zeldin’s call now reopens the conversation about her membership on it as House members prepare come back in session starting next week.

The same action was taken against Rep. Marjorie Taylor Greene (R-GA) this year after House Democrats expressed outrage over various inflammatory or controversial comments she had made that they claimed encouraged conspiracy theories and incited violence. The House voted to remove Greene from her positions on the Education and Labor Committee and Budget Committee in February. House Minority Leader Kevin McCarthy (R-CA) did not support the move, calling it a “partisan power grab,” while House Speaker Nancy Pelosi (D-CA) was in favor of it.

When asked if she was concerned about the precedent it was setting, Pelosi said at the time, “No, not at all. If any of our members threatened the safety of other members, we’d be the first ones to take them off of a committee. That’s it.” Pelosi had not commented on Omar’s most recent remarks as of the time of this writing.

Omar, who was born in Somalia, also urged for Greene to be removed from her committees, stating in February, “As a survivor of civil conflict, I know political violence and political rhetoric does not go away on its own. This is about whether or not we will continue to be a peaceful and functioning democracy.”