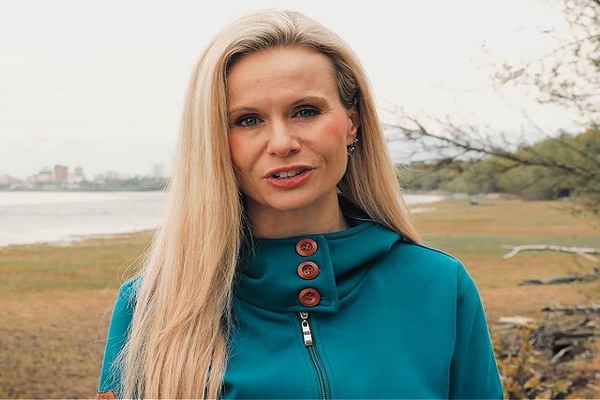 “I am grateful and thrilled to have the strong support of the Alaska Republican Party, which voted overwhelmingly to endorse my candidacy for the U.S. Senate,” Tshibaka said in a Saturday statement.

“We all share a unified goal: to promote the principles upon which our country and state were founded. I have pledged that I will be true to our shared, conservative Alaska ideals and be a senator upon whom they can depend to make every decision based on what is best for our great state,” she continued, adding that the party must move forward with a “united front, determined to defend Alaska from the continued onslaught of the radical Biden administration.”

“We need a senator who will stand with Alaskans and not cozy up to the Washington, D.C. insiders, a senator who has earned the trust of the people and strives to keep it every day,” she continued.

“It is time for conservative leaders, with courage and common sense, to rise together across the nation,” the Senate hopeful added. “I am honored to be endorsed as that candidate for Alaska.”

The endorsement comes as Murkowski, whom Tshibaka has described as a “traitor” who “sucks up to CNN” and the “radical Biden administration,” sees her favorability rating plummet among Republicans in The Last Frontier State. She has an 84 percent unfavorable rating among Republicans in her state and 59 percent unfavorability rating across the board:

“She’s been voting with them, hurting our way of life, and she’s not standing up to the radical Biden administration while they kill our oil and gas jobs,” Tshibaka said of Murkowski during an April appearance on Breitbart News Saturday.

“She’s voted to allow illegal immigrants to come into our country. Even if they commit crime, they can stay here. She was the deciding vote to keep Obamacare and that means higher health care costs and fewer healthcare choices for us in Alaska,” she continued, adding that they have “some of the highest health care costs in the country”:

She votes against common-sense judges that keep and protect our Second Amendment rights,” she said, noting Murkowski stands as one of the GOP senators who voted to convict former President Trump in the Senate impeachment trial earlier this year. “So, for all of those reasons, we are absolutely fed up with Lisa Murkowski. She was censured by the Alaska Republican Party and they said inside our borders she’s not allowed to be called a Republican anymore. I want to go to the Senate and I want to fight for Alaska.”

Murkowski did not vote for Trump in 2020 despite his policies helping the people of Alaska. Biden, Tshibaka said, attacked Alaska right when he came in office by shutting down oil and gas drilling.

“She acted like she was surprised even though, in [Biden’s] debates, he said he was going to do it. He shut down our oil and gas drilling. Alaska and our companies knew it. In contrast, what we heard under Trump is he opened up ANWR for oil and gas drilling and pushed back six decades of restrictions,” she said.

In a later appearance on the show, Tshibaka said people who formerly supported Murkowski or worked for the senator’s campaign are flocking to support her because they “understand Lisa Murkowski represents the D.C. elite, the D.C. insiders, the Biden administration, and none of that is good for Alaska.”

The vote to support Tshibaka was 58-17, whereas a vote to formally censure Murkowski after voting to convict former President Trump during impeachment was 53-17, indicating growing support for Tshibaka.