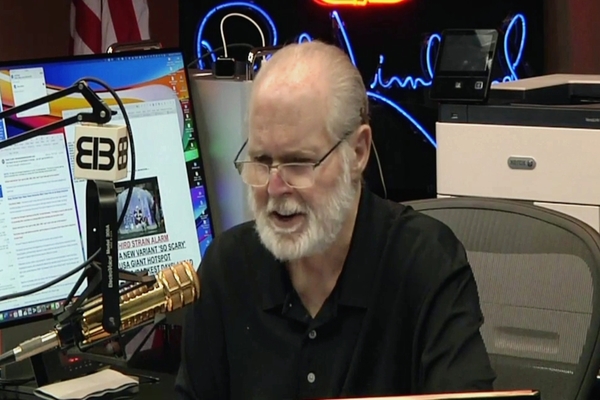 (breitbart) – Conservative talk radio pioneer Rush Limbaugh delivered an emotional monologue on December 23, his last broadcast of 2020. His message: no matter how bleak things look, Americans never give up, because have faith in the power of freedom.

Limbaugh was reacting, in part, to the grim holiday message President-elect Joe Biden issued the day before. “Here is the simple truth: our darkest days in the battle against COVID are ahead of us, not behind us,” Biden told Americans.

To Limbaugh, who received a diagnosis of terminal lung cancer earlier this year, that kind of pessimism was unacceptable:

[I]f I were president-elect of the country, it’s the last thing I would say. Even if I believed it, I doubt that I would put it this way. But I don’t believe this anyway. Our darkest days are ahead of us? What a bleak way of looking at things. … We Americans have adapted to our problems. … Our freedom has allowed our adaptability. If disaster is coming our way, we don’t just sit there and endure it. We come up with ways to avoid it, to beat it back, to overcome it, but we don’t just sit there and accept it. And, as such, we don’t just resign ourselves to the fact that they’re living in the darkest days because we, at least to this point, still have the greatest degree of freedom of any people on earth. Now, it’s under assault and under attack and we all know this. But I don’t believe our darkest days are ahead of us. I never have. People have been asking, “You’ve always told us you’d tell us when it’s time to panic. Is it time?” It’s never time to panic, folks. It’s never, ever gonna be time to give up on our country. It will never be time to give up on the United States. It will never be time to give up on yourself. Trust me.

It is remarkable to hear a man who never expected to live to the end of the year talk about faith in the future. His words were more than a rebuke of Biden. They were timely counsel to conservatives who say Trump’s departure means America’s doom.

In recent weeks, Limbaugh has shared the suspicions of many Trump supporters that the 2020 election was fraudulent. “As far as they’re concerned, why shouldn’t they cheat? Why shouldn’t they do whatever it takes to win?” he asked on November 5.

“I mean, if there’s no cheating going on, if everything’s aboveboard and if Trump’s gonna lose and he’s gonna lose legitimately and you just better get your arms around it, why not let the Republicans in and let them see Trump losing legitimately? Why are they afraid of this?” he added, commenting on Democrats’ efforts to exclude Republican observers.

After the U.S. Supreme Court declined to hear the Texas v. Pennsylvania challenge on December 11, setting the stage for Biden to win the Electoral College vote three days later, Limbaugh told listeners that the fix was in: “This is strictly about getting rid of Donald Trump. There isn’t an entity in the American deep state, Washington establishment, whatever, that doesn’t want to get rid of Donald Trump, including enough justices on the Supreme Court. … They want him gone.”

But Limbaugh counseled listeners not to give up fighting for the country. When a caller asked why voters should “bother” with the Georgia runoffs in January, Limbaugh replied: “If you lose these two seats, then it’s academic. There’s no way, you have no chance of stopping the Biden-Obama agenda. At least with these two, if they win, there is numerically a chance.”

Limbaugh’s career, spanning nearly five decades, is a story about never giving up. As he himself often recalls, he was fired from one radio job after another, and told he had no future in the business. But he was simply ahead of his time. The end of the so-called “Fairness Doctrine” and the deregulation of the airwaves inaugurated a new era of free speech. And that was when Limbaugh began to reach his audience: not just conservatives, but liberals dismayed at what their party was becoming.

As he expanded his reach, Limbaugh has inspired others to take up the cause. One was Andrew Breitbart, our founder, who recalled in his memoir, Righteous Indignation: Excuse Me While I Save the World!:

Limbaugh, like the professor I always wanted but never had the privilege to study under, created a vivid mental picture of the architecture of a world that I resided in but couldn’t see clearly: the Democrat-Media Complex. Embedded in Limbaugh’s analysis of politics was always a tandem discussion on the media. Each segment relentlessly pointed collusion between the media and the Democratic Party.

The 2020 election forced that collusion into the open — which, by now, includes the collaboration of the Silicon Valley tech giants. The censorship of the story of Hunter Biden’s laptop in mid-October, which proved that Joe Biden had lied about his knowledge of his family’s foreign business interests, will stand as one of the worst abuses in the history of American politics.

The Democrat-Media Complex believes it has won with Biden’s apparent victory. The censorship continues; executives from Silicon Valley firms are steering the Biden transition; the mainstream media preen the President-elect with fluff and flattery.

This is the greatest challenge the conservative media, and America, have faced in generations. But if Rush Limbaugh can stare death in the face and keep on fighting, we can — we will — rise to the occasion as well.

It will never be time to give up.