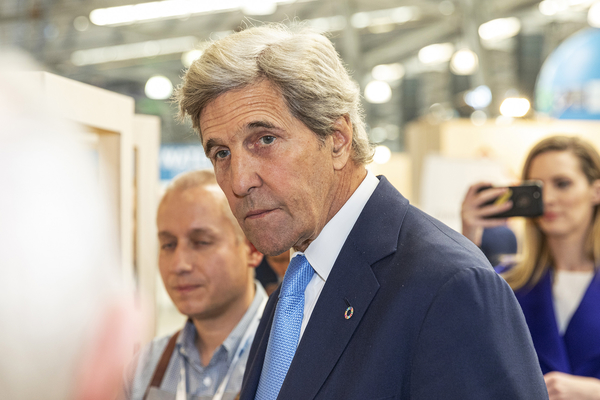 In the set of photos, Kerry is seen walking through a Transportation Security Administration (TSA) body scanner prior to boarding a flight. The Free Beacon noted that the “source who provided the photos said they were taken at 11:41 a.m. on Monday at Logan Airport.”

This is not the first time Kerry has ignored mask mandates while using air travel this year. In March, 77-year-old Kerry faced scrutiny from conservative media after he was pictured with his mask hanging from one of his ears on an American Airlines flight from Boston to Washington, DC. At the time of the first occurrence, American Airlines announced an investigation into the matter with the results of their findings being unclear.

Kerry acknowledged the March photo in a tweet, saying it was only “momentary” that his mask was removed from his face.

“Let’s be clear: If I dropped my mask to one ear on a flight, it was momentary,” Kerry wrote in a tweet. “I wear my mask because it saves lives and stops the spread. It’s what the science tells us to do.”

In a statement to the Free Beacon, a spokeswoman for Logan Airport said that, in an effort to comply with TSA mandate, masks are required “any time someone is inside the airport or on an aircraft,” which includes security screenings.

In May, the TSA announced the mask mandate for public travel by air, bus, and rail would be extended until September 13 of this year. It was originally set to expire on May 11. Last month, several Republican Senators, including Ted Cruz (R-TX) and Susan Collins (R-ME), introduced a resolution that urges the Centers for Disease Control and Prevention (CDC) to update the federal mask mandate requiring face coverings to be worn on certain modes of public transportation.

According to the TSA’s official website, those who violate the “Security Directive” set forth by TSA face fines “ranging from $250 for the first offense up to $1,500 for repeat offenders.” The website also states that “TSA has provided transportation system operators specific guidance on how to report violations so that TSA may issue penalties to those who refuse to wear a face mask.”