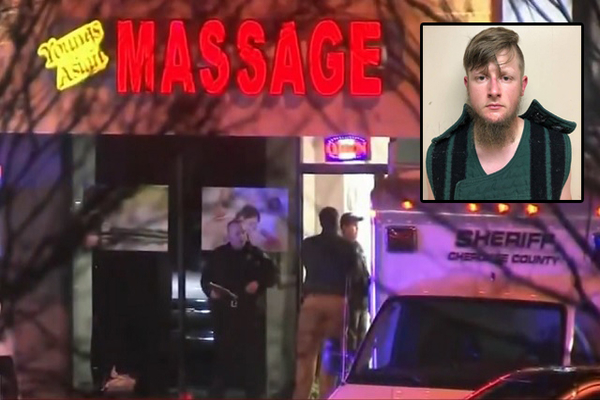 (informationliberation) – The shooting in Georgia on Tuesday night was not an “anti-Asian hate crime” targeting “salons” and “spas” as the media and Democrat politicians claimed.

From The Daily Mail, “God-fearing Georgia gunman, 21, targeted three massage parlors because he blamed them for his sex addiction as cops say his deadly shooting spree was NOT racially motivated”:

The God-fearing gunman who killed eight people at three Georgia massage parlors on Tuesday targeted the locations because he’d visited them before and blamed them for his sex addiction, cops revealed on Wednesday morning.

Robert Aaron Long, 21, shot dead eight people including six Asian women at three parlors – one in Acworth and two in Atlanta – on Tuesday.

He then went on the run and was driving to Florida to target more locations when he was arrested 150 miles south of Atlanta.

On Wednesday, police said that contrary to initial reports, the attacks were not racially motivated but that Long had told them he was addicted to sex an wanted to remove the ‘temptation’ of the parlors.

They say he saw the parlors as an ‘outlet’ for his sex addiction but they wouldn’t clarify if he had ever engaged in sex acts with any of the staff there.

He was planning on driving to Florida to attack more locations when he was caught and those Florida locations were somehow connected to pornography.

‘He claims that it was not racially motivated.

‘He has an issue that he considers a sex addiction and sees these locations as something that allows him to go to these places… it’s a temptation for him that he wanted to eliminate.

‘He was at the end of his rope and yesterday was a very bad day for him,’ Captain Jay Baker of the Cherokee Sheriff’s Office said.

His family is said to be cooperating with the police investigation. Cops said they were shocked when they were told what he had done.

Long purchased his 9mm handgun hours before opening fire at around 5pm at Young’s Massage Spa. It’s unclear if he bought it legally.

[…] Two residents of the Atlanta neighborhood, Piedmont Heights, described the stretch where the shootings took place to the New York Times as the ‘red-light district’ of the local community.The police chief also said that two of the victims were white.

Here’s some Democrat reactions from Twitter, some of which were posted just a few hours ago (facts of the case be damned):

The overwhelming majority of anti-Asian attacks have had African-American perps but the media have been doing everything in their power to blame it all on “white supremacy.”

This is certainly a newsworthy tragedy but how many people heard about the horrendous mass shooting in Chicago on Sunday which left 13 injured and 2 dead?

The shooting was caught on tape and very easily could have been turned into a top story — instead it was just brushed over or ignored because it couldn’t be blamed on “white supremacy”:

I didn’t see any politicians tweeting about it.

As I reported last month, much-hyped so-called “domestic extremism-related” killings are the lowest they’ve been in at least a decade, according to the Anti-Defamation League’s own numbers.

Meanwhile, the number of homicides in cities throughout the country has skyrocketed in the wake of the George Floyd riots.

A study which examined crime rates in a sample of 34 American cities found that “homicide rates jumped by 30 percent from 2019 to 2020, while gun assault and aggravated assault rates climbed 8 percent and 6 percent, respectively,” Fox News reported last month.

The 30 percent surge in homicides in one year reportedly “has no modern precedent.”

The way every last shooting is just ignored if it can’t be exploited for political gain or blamed on “white supremacy” is getting to be ridiculous.