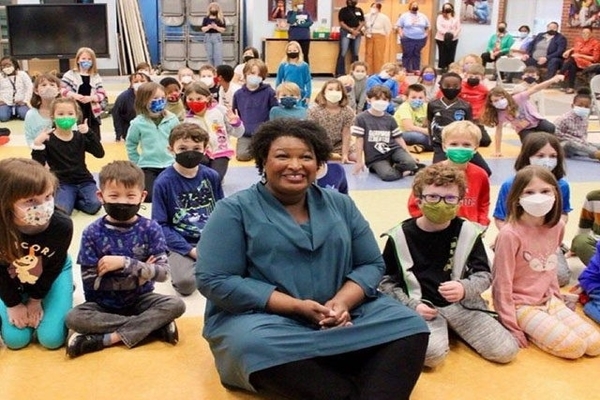 (breitbart) – Georgia Democrat Stacey Abrams appeared maskless on Friday in front of dozens of masked elementary school children in a photo that she has since deleted after it sparked widespread outrage.

City Schools of Decatur, which Glennwood Elementary is a part of, specifies on its website that all students and employees inside Decatur school buildings must wear masks. A pamphlet on the website also specifies that cloth masks are among the “approved mask types.”

The photo of Abrams was first shared Friday by Glennwood principal Holly Brookins in a Twitter post, and then retweeted by Abrams, who was subsequently met with a massive wave of criticism for being the only individual in the photo not wearing a mask.

Abrams, an outspoken voting rights activist, is running for governor of Georgia for a second time after losing to Gov. Brian Kemp (R) by a razor-thin margin in 2018. Abrams has repeatedly accused Georgia of “inaction” over its coronavirus response, though it is unclear what her exact position on masks is.

Breitbart News reached out to the Abrams campaign to ask about her stance on government and school officials imposing mask mandates on adults and children, as well as to inquire about her reason for deleting the now-viral photo, but the campaign did not respond.

In response to Abrams’ photo, Kemp accused the Georgia Democrat of hypocrisy and said the photo proves her pursuit for the governorship is “a quest for more power.”

“Stacey Abrams wants state government mask mandates for Georgians and their children. But it looks like they wouldn’t apply when she’s attending a photo op,” Kemp spokesman Tate Mitchell said in a statement provided to Breitbart News. “This kind of hypocrisy is exactly why Georgians see her campaign for governor for what it truly is: a quest for more power. Governor Kemp will continue fighting to put students and parents first.”

Former Sen. David Perdue (R-GA) blasted Abrams for the photo but also lashed out at Kemp, whom he is seeking to unseat in the Republican gubernatorial primary race. Perdue claimed the governor has “failed students and parents by allowing” school mask mandates.

“Many Georgia kids are facing this mask nonsense every day,” Perdue said in a statement. “Kemp has failed students and parents by allowing liberal school districts to force mask mandates upon them. It’s a disgrace and it needs to end. It’s time to empower parents and reign in these power-hungry career politicians.”

Other reactions to Abrams’ photo:

Abrams joins a slew of Democrat politicians who have recently been caught posing maskless for photos. California Gov. Gavin Newsom (D), who has imposed a statewide mask mandate on his residents, was pictured last weekend at the NFC Championship Game posing maskless with NBA star Magic Johnson.

Los Angeles Mayor Eric Garcetti (D) was also photographed with Johnson at the game and later justified that “when people ask for a photograph, I hold my breath.”

Rep. Jamaal Bowman (D-NY) was pictured this past week as the only maskless individual in a photo one day after reminding people to “make sure to mask up.”