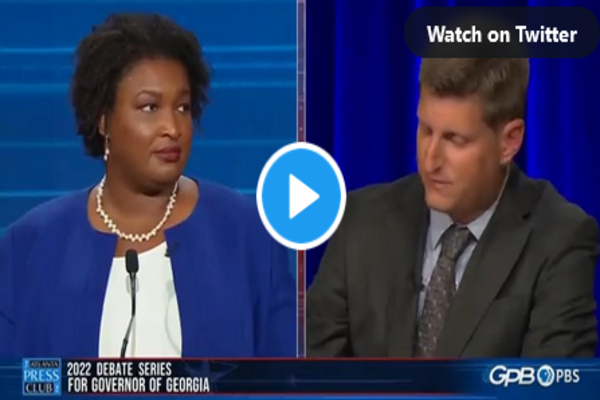 (breitbart) – Republican Georgia Gov. Brian Kemp crushed Democrat challenger Stacey Abrams on Monday, hitting her for being weak on crime and for wanting lockdowns during the coronavirus pandemic.

As the debate began, Abrams once again peddled the lie that she conceded the 2018 election to Brian Kemp even though she spent months asserting that the election had been rigged against her.

When Georgia passed its voter integrity law in 2021, President Joe Biden and Stacey Abrams referred to it as “Jim Crow 2.0,” but as Kemp rightly noted in the debate, black voter turnout in Georgia has steadily increased since the law’s passage.

“In 2018, in the governor’s race, we had the largest African American turnout in the country. She said that Senate Bill 202, our recent election integrity act that we passed two years ago, would be suppressive and Jim Crow 2.0. Just this past May, in our primaries, we again had record turnout in the Republican primary and the Democrat primary. In Georgia, it’s easy to vote and hard to cheat,” he said.

Kemp also hit Stacey Abrams for her Black Lives Matter extremism, from her support of Defund the Police and the elimination of cash bail.

“I support safety and justice,” he said. “No sheriffs are endorsing her statewide because of her stances on wanting to Defund the Police, eliminate cash bail, and serving on the boards of organizations like the Margurite Casey Foundation that supports and gives grants to organizations that are promoting the Defund the Police movement.”

Brian Kemp made waves during the 2020 lockdowns by being one of the first states to open for business, during which Stacey Abrams said there was “no legitimate reason” for her state to lift virus restrictions.

There’s no legitimate reason for reopening the state except for politics, and I think it’s deeply disingenuous he would pretend otherwise,” she said at the time.

“We’re not ready to return to normal,” she added. “We have people who are the most vulnerable and the least resilient being put on the front lines, contracting a disease that they cannot get treatment for.”

Kemp took Abrams to task for her past pro-lockdown policy that would have crippled Georgia’s economy.