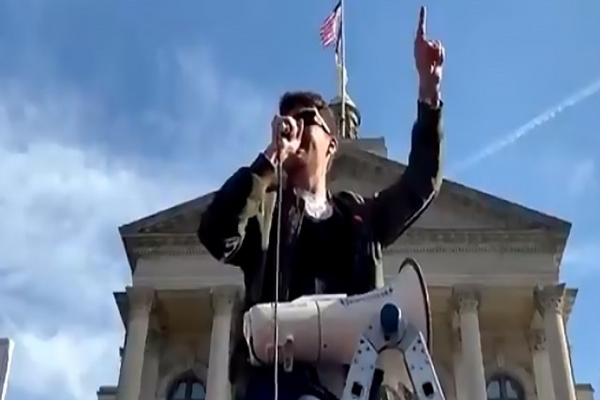 Fuentes’ speech was featured right at the top of the article:

The video was captured live on Saturday by Tea Party Patriots.

Fuentes added that “President Trump fought” the establishment and special interests and “made the Republican Party represent us, the American people,” and that the current fight against the Republican Party’s willingness to let Joe Biden win the election through fraud represents an extension of the same inter-party turmoil.

“Once again we find ourselves fighting the same battle, as President Trump fights for his political life, we look in this state and in this country, the Republican Party is nowhere to be found,” said Fuentes. “Where are the 2024 hopefuls, like Nikki Haley and Ben Sasse and Marco Rubio and Dan Crenshaw? They are nowhere to be found, and it is a disgrace.”

Fuentes then said that the consequence of failing to prove the allegations of voter fraud and successfully stop the theft of the 2020 election will mean the beginning of The Great Reset, a World Economic Forum-endorsed plan to fundamentally change the world economy under the guise of a COVID-19 response.

“If we are unsuccessful in our struggle to secure President Trump another term in office, then that will institute and introduce the will of global corporations over this country. They have already told us for their plan for us, it is called The Great Reset,” said Fuentes. “Under the Great Reset we will be ruled by a public and private partnership between the global governments of the world and the giant corporations of the world. We cannot allow that to happen.”

“We Americans have inherited the greatest civilization in the history of the world, and we’re not giving it up without a fight,” he added. “It is time for America and the Americans to be put first.”

Fuentes’ speeches railing against globalism, the New World Order and GOP elites have been going viral all over Twitter:

Fuentes gave a similar speech railing against the GOP establishment to a massive crowd at the Stop the Steal rally in DC on Nov 14:

Vincent James of The Red Elephants also gave a speech which went viral telling Republican “traitors” that if they don’t help “stop the steal” then “we will end your career forever” and do “whatever it takes to destroy the Republican Party.”

Nick Fuentes was banned from YouTube in February by Susan Wojcicki, Vincent James was banned in August but they’ve survived their deplatforming through the use of alt tech and taken their fight to the streets.

“Stop The Steal” itself was banned from Facebook earlier this month but went on to hold a massively successful rally which drew hundreds of thousands in Washington, DC.