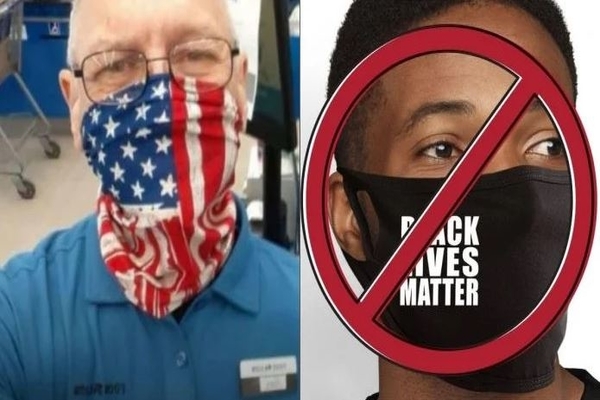 (nationalistreview) – Food Lion, A 1,000 Store Grocery Chain, Makes Subtle Ban Of Black Lives Matter Insignia Clear And Says The American Flag Is Welcome At Their Locations
Last week, the national media reported on an alarming Food Lion store policy: employees were forbidden from wearing any American flag insignia on their mandated face coverings. A veteran of the United States Air Force, Gary Dean, was asked to replace his face mask due to it being an American flag bandanna. Dean chose to quit working at the grocery chain since he decided that their policies were not in line with his principles as a former airman.

But now, Food Lion has reversed their decision, and the new employee policy effectively bans any political face masks other than patriotic representations of red, white, and blue. So while employees are able to wear Old Glory proudly, Black Lives Matter, antifa, and other political slogans are prohibited by the policy.

Nationalist Review works hard to bring you stories you won’t see anywhere else. Please consider following our Facebook page, sharing this article on your own social media pages, signing up for our newsletter, or making a small donation. Your support goes a long way!

Any updates to this story will be posted on our Update Tracker page.

In other words, “Black Lives Matter” masks cannot be worn—a small victory for all those sick of the rioting and corporate appeasement.

Food Lion has also made moves to support local veterans shopping at their locations:
The Marion, South Carolina store is just one location that, in addition to offering the standard handicap spaces, has created designated parking spots for veterans.

Not a stranger to fake news, the grocery chain once sued ABC:
ABC attempted to work with a grocery employee union in order to undermine Food Lion in the early ’90s. The mainstream media’s two undercover operatives took jobs at Food Lion and began pressuring employees to break company policy rules on camera. When the ploy failed, ABC chose to publish blatantly false claims.

In a now unbelievable segment that, at the time, disgusted contemporary viewers, American Broadcasting Corporation claimed that Food Lion was soaking spoiled fish and meat in Clorox in order to mask the smell. The lawsuit that followed caught them red-handed when over 40 hours of unreleased footage was entered into evidence. Unfortunately, the one year statute of limitations for libel had expired at this point.