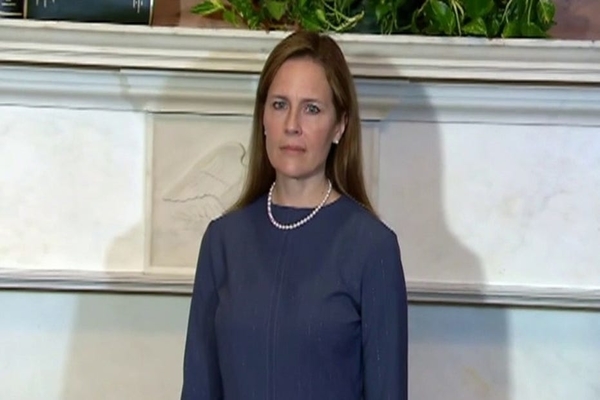 (breitbart) – Supreme Court Justice Amy Coney Barrett on Wednesday nodded to the argument that abortion laws could be an “infringement on bodily autonomy” before saying such issues exist in “other contexts like vaccines.”

The justice, who was nominated by former President Donald Trump and leans conservative in her decision making, made the remark during oral arguments in the Dobbs v. Jackson Women’s Health Organization case. The case, which is centered on Mississippi’s law banning abortions after 15 weeks of pregnancy, is the biggest challenge to Roe v. Wade in decades — a 1973 decision that declared abortion a constitutional right, despite it being mentioned nowhere in the text of the U.S. Constitution.

Barrett was asking the the Senior Director of the Center for Reproductive Rights, Julie Rikelman, about the implication Safe Haven laws could have on abortion law, specifically questioning whether the current law gives equal burden to both parenthood and pregnancy. Safe Haven laws are designed to prevent the abandonment of newborns and allow parents to leave newborns at any Safe Haven facility recognized by state law. The child then becomes a ward of the state. The exact parameters vary from state to state, though all 50 states have Safe Haven laws.

Ms. Rickelman, I have a question about the Safe Haven laws. Petitioner points out that in all 50 states, you can terminate parental rights by relinquishing a child after abortion. And I think the shortest period might have been 48 hours if I’m remembering the data correctly. So it seems to me, seen in that light, both Roe and Casey emphasize the burdens of parenting and insofar as you and many of your amici focus on the ways in which the forced parenting, forced motherhood would hinder women’s access to the workplace and to equal opportunities, it’s also focused on the consequences of parenting and the obligations of motherhood that flow from pregnancy.

Why don’t the Safe Haven laws take care of that problem? It seems to me that it focuses the burden much more narrowly. There is without question an infringement on bodily autonomy, which we have in other contexts like vaccines. However, it doesn’t seem to me to follow that pregnancy and then parenthood are all part of the same burden. And so it seems to me that the choice for focus would be between, say, the ability to get an abortion at 23 weeks or the state requiring the woman to go 15, 16 weeks more and then terminate parental rights at the conclusion. Why don’t you address the safe haven laws and why don’t they matter?

There has been speculation that the Biden administration will eventually appeal to the Supreme Court after several judges halted one or another of its federal coronavirus vaccination mandates. A judge on Tuesday issued a nationwide preliminary injunction against Biden’s mandate for healthcare workers soon after another judge halted the mandate in ten states.

The Occupational Safety and Health Administration (OSHA) also suspended the implementation of its federal vaccine mandate affecting roughly 80 million workers in the U.S. after the U.S. Court of Appeals for the Fifth Circuit granted a motion to stay its COVID-19 Vaccination and Testing Emergency Temporary Standard (ETS).