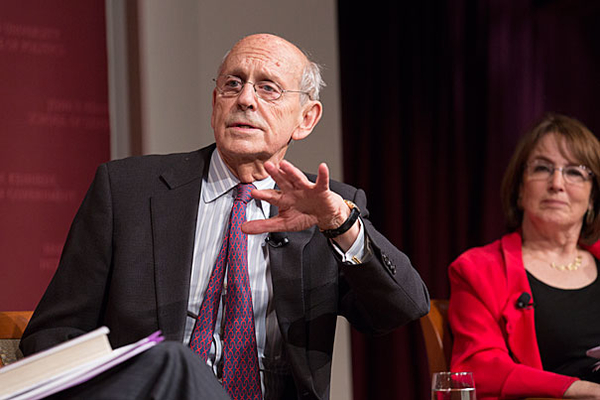 Jones is the first to publicly call on Breyer to retire, though he joins the liberal group Demand Justice which has called for the 82-year-old, President Clinton-appointed justice to step down.

“There’s no question that Justice Breyer, for whom I have great respect, should retire at the end of this term. My goodness: have we not learned our lesson?” Jones told Cheddar News responding to a comment that some Democrats were frustrated late Supreme Court Justice Ruth Ginsburg did not retire during the Obama presidency.

Jones added that Breyer’s retirement would mean Biden could appoint and the Senate could confirm “jurists on the Supreme Court who are not hostile to our democracy who will adjudicate cases that will protect and preserve voting rights and that will respect the will of Congress.”

Breyer, the eldest of the nine judges, was appointed in 1994.

The calls come in the wake of a speech Breyer gave to Harvard Law School students and alumni earlier this week when he warned that court packing could harm the rule of law in the U.S.

Another side of the truck read, “It’s time for Black woman Supreme Court justice. There’s no time to waste.”

The truck was paid for by Demand Justice.

Breyer also said he believes his fellow justices take their oath to be unbiased seriously.

“If the public sees judges as politicians in robes, its confidence in the courts and in the rule of law can only diminish, diminishing the court’s power, including its power to act as a check on other branches,” he said. “My experience of more than 30 years… as a judge has shown me that once men and women take the judicial oath they take that oath to heart. They are loyal to the rule of law, not to the political party that helped to secure their appointment.”

Democrats have been eyeing a number of ways to fight back against the 6-3 conservative majority on the high court, including adding seats to the bench.

Biden has implemented a commission to study court reforms, rather than getting on board with the court-packing plan. Pelosi and Sen Dick Durbin, D-Ill., have said they support the commission but are hesitant about packing the court.