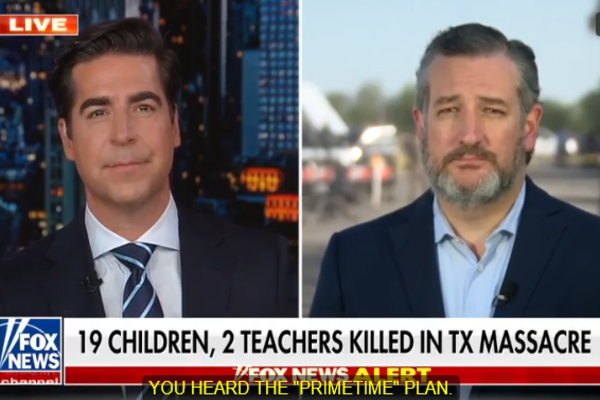 (breitbart) – On Wednesday’s broadcast of the Fox News Channel’s “Jesse Watters Primetime,” Sen. Ted Cruz (R-TX) stated that Democrats blocked legislation he proposed in 2013 to bolster school security and keep firearms out of the hands of criminals and the mentally ill by keeping it from reaching the 60-vote threshold.

Cruz said, “In 2013, I introduced legislation that would spend $300 million on federal grants to harden schools to make them safer, to make them more protected. The Democrats filibustered that legislation. I’ve introduced legislation to say schools like this elementary school behind me can get federal grants to harden their security, to put in bulletproof doors, bulletproof glass, to put in armed police officers to protect kids.”

He later added, “In 2013, I introduced legislation called Grassley-Cruz, which targeted felons and fugitives and those with serious mental illness. It directed the Department of Justice to do an audit of federal convictions to make sure felons are in the database. It directed the Department of Justice to prosecute and put in jail felons and fugitives who try to illegally buy firearms. That vote in the Harry Reid, Democrat Senate…a majority of the Senate voted in favor of Grassley-Cruz, but the Democrats filibustered it. They demanded 60 votes. They defeated it because they wanted to go after law-abiding citizens instead of stopping the bad guys. We need to stop the bad guys.”