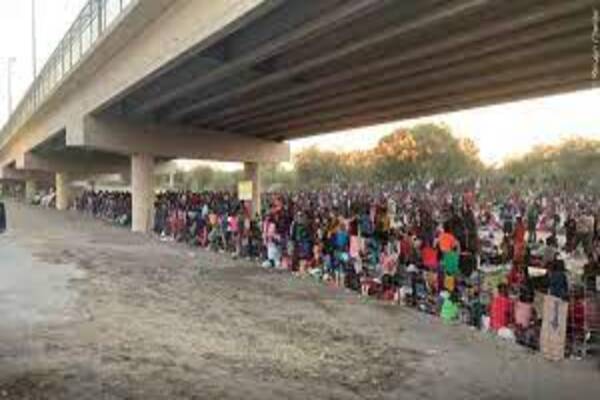 County Officials from Uvalde, Kinney, Terrell, Medina, Burnet, and Goliad Counties met in Bracketteville on Tuesday afternoon to express concerns over the rapidly rising numbers of migrants illegally crossing the border from Mexico into Texas. 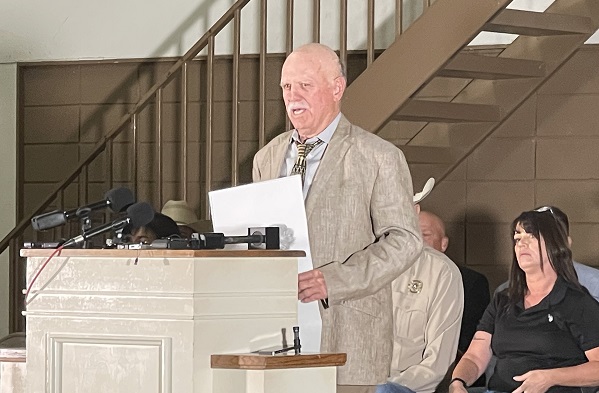 A press release from Kinney County details the impact of the surge of human smuggling activity in their county.

“During the month of June, Kinney County law enforcement has prevented over 67 smuggling attempts along our roadways,” the statement reads. “This past weekend included the unfortunate deaths of 3 illegal aliens who were involved with human smuggling in Kinney County.” 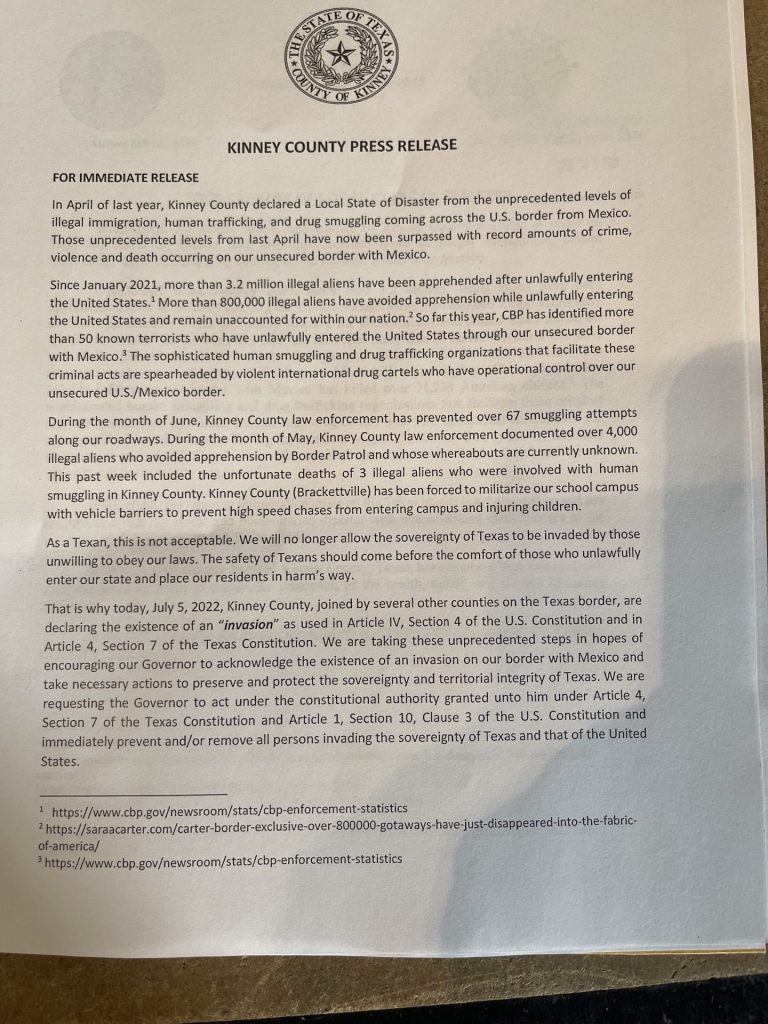 The officials stated the county has been forced to “militarize our school campus with vehicle barriers to prevent high-speed chases from entering campus and injuring children.”

“As a Texan, this is not acceptable,” County Judge Tully Shahan wrote. “We will no longer allow the sovereignty of Texas to be invaded by those unwilling to obey our laws.”

“That is why today, July 5, 2022, Kinney County, joined by several other counties on the Texas border, are declaring the existence of an “invasion” as used in Article IV, Section 4 of the U.S. Constitution and in Article 4, Section 7 of the Texas Constitution.”

“We are taking these steps in hopes of encouraging our Governor to acknowledge the existence of an invasion on our border with Mexico and take the necessary actions to preserve and protect the sovereignty and territorial integrity of Texas.” 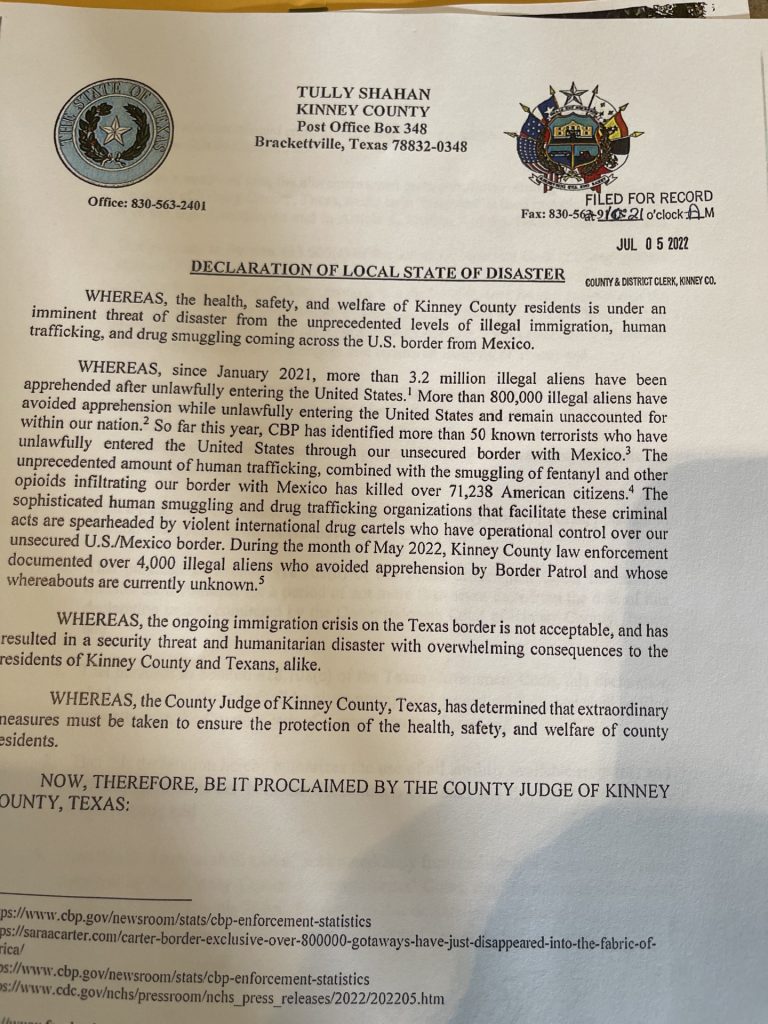 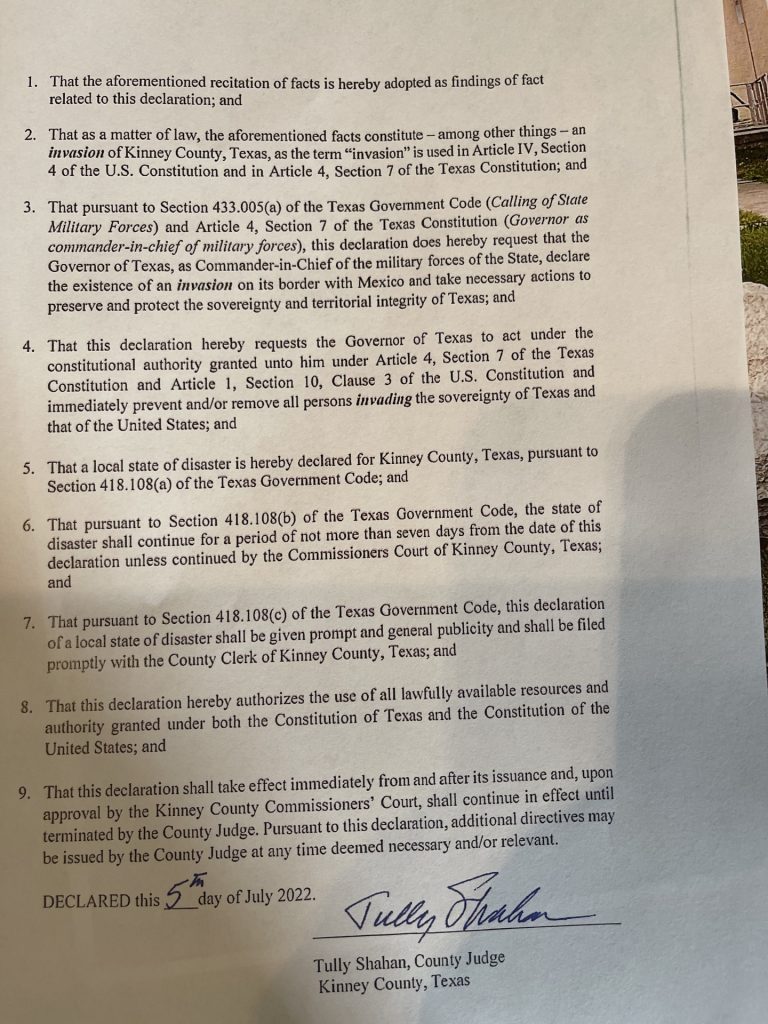 Breitbart Texas reached out to Governor Greg Abbott’s office for a reaction to the declaration by the counties. A response was not immediately available.

Bob Price serves as associate editor and senior news contributor for the Breitbart Texas-Border team. He is an original member of the Breitbart Texas team. Price is a regular panelist on Fox 26 Houston’s What’s Your Point?Sunday-morning talk show. Follow him on Twitter @BobPriceBBTX and Facebook.

Editor’s Note: This is a developing story and will be updated as additional information becomes available.