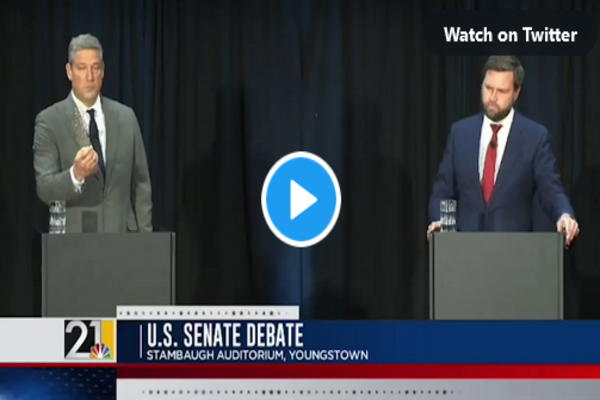 (breitbart) – Republican J.D. Vance, running against Rep. Tim Ryan (D-OH) for Ohio’s open United States Senate seat, slammed the Democrats, including his opponent, for causing attacks on his biracial children when they attempted to link him to the great replacement theory.

Vance, during the Ohio Senate debate Monday night, said his biracial children end up getting attacked online and in person by “scumbags” because Democrats, like Ryan, are “so desperate for political power” that they would accuse him of “engaging in racism.”

“What happens is my own children, my biracial children, get attacked by scumbags, online and in person, because you are so desperate for political power that you’ll accuse me, the father of three beautiful biracial babies, of engaging in racism,” Vance continued. “We are sick of it!”

“You can believe in a border without believing a racist. You can believe in the country without being a racist, and this just shows how desperate this guy is for political power,” Vance added. “I know you’ve been in office for 20 years, Tim, and I know it’s a sweet gig, but you’re so desperate not to have a real job that you’ll slander me and slander, my family. It’s disgraceful.”

Breitbart News has previously explained what the great replacement theory is:

The “Great Replacement” theory was first developed by French author Renaud Camus to describe the rapidly shifting demographic changes across France and other countries due to mass migration.

The theory, which is characterised as a “conspiracy theory” in much of the French and international mainstream media, is believed by at least a quarter of the French population, according to a survey released in February of this year.