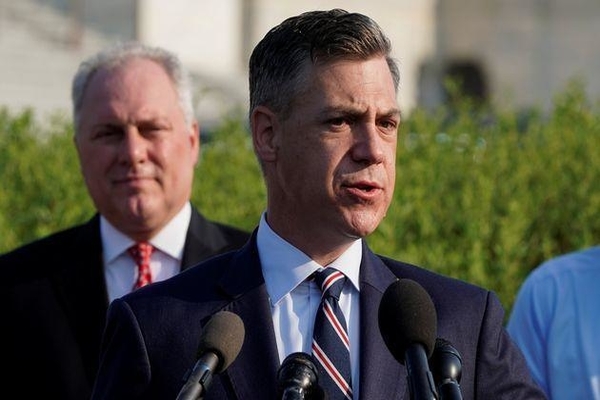 (breitbart) – After facing swift and intense backlash from conservatives and Republican lawmakers, Sen. John Cornyn (R-TX) claimed that he was joking about striking a deal on amnesty after negotiating a deal on gun control.

In response to Cornyn’s comment, Sinema said, “That’s right, we’re going to do it.”

McCarthy said amnesty was not on the table.

“.@GOPleader already pledged NO AMNESTY. Republicans in the House are united and so are our voters!”

After the backlash, Cornyn claimed that he was merely joking and that no immigration talks are expected to occur.

“The Democrats and their allies in the media really can’t take a joke. There’s no secret amnesty bill,” Cornyn told Breitbart News on Wednesday morning. His office confirmed to Breitbart News that the senator’s remark was made purely in jest.

Despite Cornyn’s claim, the Texas senator has called for negotiations that would provide amnesty for illegal aliens in the past.

Sens. Thom Tillis (R-NC) and Cornyn have pushed for amnesty with the help of Sens. Padilla (D-CA) and Dick Durbin (D-IL), the Senate Democrat whip.

“The only way that we’re going to get real progress is to have a four-pillar discussion — so immigration reform, DACA, border security and then I think asylum reform is pretty important, particularly with that’s going on with Title 42,” Tillis said in April.

“We’ve got a starting list. There could be some more. But it’s a starting point. I’ve talked to four or five Republican senators today. There’s a genuine interest in doing something,” Durbin said.

In March, Cornyn floated a proposal to prioritize protections for current Deferral Action for Childhood Arrivals (DACA) recipients, as compared to the millions of DACA-eligible illegal aliens.

“I’ve always been sympathetic to giving them some certainty,” Cornyn said. “They’ve been in litigation for 10 years.”

In June 2020, after the Supreme Court upheld the Obama-era amnesty programs, Cornyn took the Senate floor to argue that it was time for a “permanent solution” for the illegal aliens in the country.

“DACA recipients deserve a permanent, legislative solution,” Cornyn said. “We must take action and pass a law that will unequivocally allow these young men and women to stay in the only home they’ve ever known. They deserve nothing less.”

“There’s a way to get to 10 Republican senators. The trick will be to do that while holding on to the Democrats,” Noorani said.