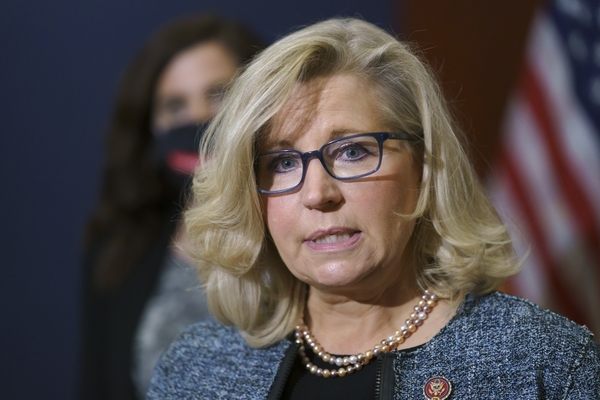 Davidson, an Army veteran, spoke to Breitbart News as Biden has been largely criticized for his strategy to withdraw from Afghanistan. While Davidson said that he has supported ending the war in Afghanistan since 2011, he said that the 46th president did not withdraw “correctly.” He also called Biden’s withdrawal plan a “failure.”

The Ohio conservative, however, did note that some of the blame lies with Cheney, a member of the Never Trump and neoconservative wing of the GOP.

Cheney, along with Rep. Jason Crow (D-CO), sponsored in July 2020 an amendment to the National Defense Authorization Act (NDAA) that would restrict then-President Trump’s ability to withdraw troops from Afghanistan unless certain conditions were met.

The amendment, otherwise known as the Afghanistan Partnership and Transparency Act (APTA), would restrict the use of funds to reduce the number of U.S. troops in Afghanistan below 8,000 unless certain conditions were met. This included:

Rep. Jim Banks (R-IN) told Breitbart News Tonight host Rebecca Mansour in January 2021 that Cheney’s amendment was “egregious” and the “opposite” of what America should do. Other House conservatives raged against Cheney’s efforts to stall Trump’s efforts to end the war in Afghanistan.

Davidson said that if Trump had his way, America would have left Afghanistan by Christmas 2020. However, the revised deal with the Taliban led to a May 1 withdrawal.

Since then, Biden revised his target date to leave the country by September 11, 2021.

Davidson emphasized that leaving by Christmas or the beginning of May would be far safer than in the summer because it would be less favorable for the Taliban.

“And why is that important, whether it’s Christmas or May first, this falls in a period of time where we’re, you know, the fighting season in Afghanistan, is limited by weather conditions. And so, you know, bad weather favors an exit more than the mid-summer right now. And so, you know, if you’re gonna do it right now, then maybe you need a different plan if you’re going to do it in a different part of the year,” Davidson added.

Davidson’s argument would suggest, in part, Cheney and Crow’s delay of Trump’s withdrawal played a part in the current Afghanistan debacle.

Davidson also said Biden’s botched withdrawal proves the need for America to send a strong message to the world.

He said, “I think a lot of people see that Joe Biden is a weak leader, whether this shows that he’s found the resolve in the administration, whether it’s him or whoever has found the resolve, we have to send a clear-cut message, a clear message to the Taliban, but also really to the watching world, that America will establish security, America will protect Americans and America will protect our allies. And that stage right now is in Afghanistan was led by the Taliban. But the observers are global.”