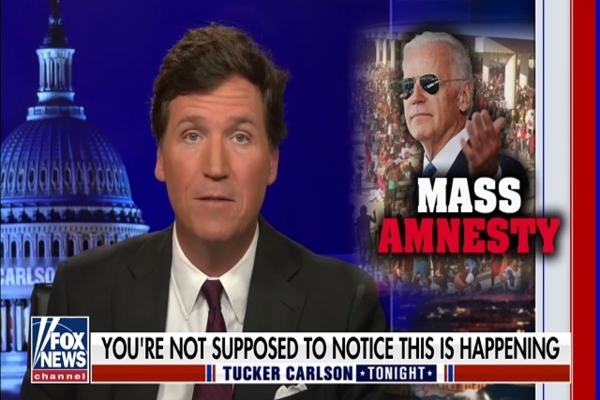 (IL) – Fox News host Tucker Carlson on Wednesday night played a clip of Joe Biden from 2015 hailing white people becoming a minority in America as “a source of our strength” and something “we can be most proud of.”

Tucker said Biden’s own words show the goal of mass immigration is “to change the racial mix of the country.”

“In political terms, this policy is called the Great Replacement,” Tucker said. “The replacement of legacy Americans with more obedient people from far away countries.”

“Nothing about it is an accident, obviously,” Carlson said of the border crisis. “It’s intentional. Joe Biden did it on purpose. But why? Why would a president do this to his own country?”

He added, “Our system cannot handle this many destitute newcomers, period. Imagine what hospitals are going to look like a year from now. How about schools? What Joe Biden is doing now will change this country forever. So again, why is he doing it? There’s only one plausible answer.”

The Fox News host played a clip of then-Vice President Biden in 2015 talking about immigration. Biden said, “An unrelenting stream of immigration, nonstop. Nonstop. Folks like me who are Caucasian of European descent for the first time in 2017 will be in an absolute minority in the United States of America. Absolute minority. Fewer than 50 percent of the people in America from then and on will be White European stock. That’s not a bad thing. That’s a source of our strength.”

Carlson responded, “Biden just said it: to change the racial mix of the country. That’s the reason, to reduce the political power of people whose ancestors lived here and dramatically decrease increase the proportion of Americans newly arrived from the Third World.”

“This is the language of eugenics,” Carlson continued. “It’s horrifying. But there’s a reason Biden said it. In political terms, this policy is called the great replacement, the replacement of legacy of Americans with more obedient people from far away countries. They brag about it all the time, but if you dare to say it’s happening, they will scream at you with maximum hysteria. And here you have Joe Biden confirming his motive on tape with a smile on his face. No one who talks like this should ever be the president of the United States.”

As Tucker noted, there’s a remarkable dichotomy whereby leftists can cheer this replacement openly to plaudits while right-wingers who criticize it are accused of being the embodiment of pure evil.

Just last month, Washington Post columnist Jennifer Rubin celebrated the “fabulous news” that the 2020 Census showed whites in America were becoming a minority at a rapid pace and had their total population numbers decline for the first time in our nation’s history.

“This is fabulous news,” Rubin said on Twitter. “Now we need to prevent minority White rule.”

The Anti-Defamation League has been working behind the scenes for months now organizing advertiser boycotts against Tucker Carlson’s show for talking about the Great Replacement, which CEO Jonathan Greenblatt says is an “anti-Semetic” conspiracy theory.

Meanwhile, as Tucker Carlson pointed out on his show in April, the ADL are big believers in the “Great Replacement theory” when it comes to Arab immigration to Israel.

As Carlson highlighted, the ADL’s guide for pro-Israel activists on their website tells their followers to say that the idea of “bi-nationalism” in Israel “is unworkable given current realities and historic animosities” and amounts to “nothing less than an indirect attempt to bring about an end to the State of Israel as the national homeland of the Jewish people.”

“With historically high birth rates among the Palestinians, and a possible influx of Palestinian refugees and their descendants now living around the world, Jews would quickly be a minority within a bi-national state, thus likely ending any semblance of equal representation and protections,” the ADL says. “In this situation, the Jewish population would be increasingly politically – and potentially physically – vulnerable.”

“It is unrealistic and unacceptable to expect the State of Israel to voluntarily subvert its own sovereign existence and nationalist identity and become a vulnerable minority within what was once its own territory.”

The SPLC, which echoes similar hysterics about “the Great Replacement conspiracy theory,” had one of their (now disgraced) former top officials tracking the decline of the white population in America and Europe on the wall of his home office.

How can this replacement be a “conspiracy theory” and a demographic fact that “we can be most proud of” at the same exact time?