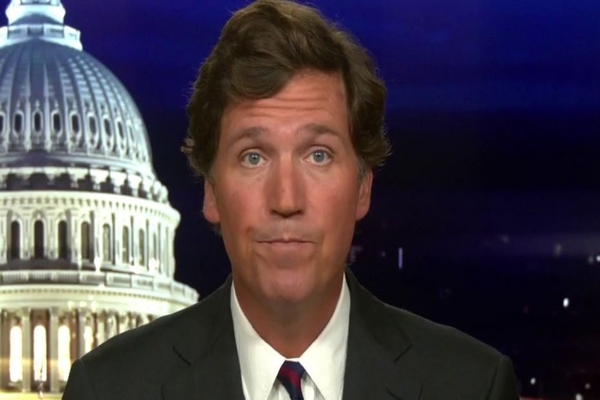 (dailyconservative) – On Fox News Friday night, Tucker Carlson recognized that the tide of the upcoming election might have turned after each party held its convention.

“[Joe Biden’s] voters have destroyed cities across the country and murdered dozens of Americans. He must stay silent about that,” Carlson said.

“But Donald Trump doesn’t have to, and so he said it, and as a result, for the first time since the Wuhan coronavirus arrived here, the President seemed likely to win reelection,” he continued.

He went on to say that Americans “hate the violence” Democrats “have unleased.”

Hopefully voters will hold them accountable for what they have tried to do in creating chaos that they hoped to be able to take advantage of.

Given the lackluster production elements of the Democratic convention with a backdrop of unrest in the streets with little or no pushback from Democrats, Carlson said it seemed as if Trump was positioned to win reelection.

CARLSON: The President accepted his party’s nomination last night from the White House. He gave a long speech. It was more than 70 minutes. Compare that to Joe Biden’s 24-minute Zoom call last week, and the President address wasn’t loaded with applause lines. It wasn’t written in sound bites for Twitter. It was pretty meaty.

He spoke at length about trade and manufacturing and jobs. He warned about illegal immigration and the burden of more refugees from dangerous countries.

He pointed to Joe Biden’s record, which is thin as a corrupt and incompetent political lifer. A man who, after 50 years, can’t point to a single significant policy achievement.

But the best part of this speech, the moment that defined it really came early on, when Trump affirmed what you already know. This is not a wicked nation. Our cops are not inherently racist, neither is America.

They tell you that constantly, but they are lying. The United States has flaws, but it’s also the President, reminded us last night, the most free, just, and exceptional nation on Earth. That’s true.

In our country, free speech is allowed. Violence is not allowed. What separates American democracy from Taliban theocracy, for example, is that in America, people can disagree with one another and disagree with the government without fearing for their lives. This used to be obvious. It was the foundation of our civic life.

And yet, all of a sudden, Joe Biden could never say this out loud. His voters have destroyed cities across the country and murdered dozens of Americans. He must stay silent about that.

But Donald Trump doesn’t have to, and so he said it, and as a result, for the first time since the Wuhan coronavirus arrived here, the President seemed likely to win reelection.

Democrats are watching carefully. They know this. They can smell something has changed. They know why. Normal people hate the violence they have unleashed. And that’s why this week, finally after months, Joe Biden issued a tepid statement gently scolding the rioters, but it’s too late for that. This has gone on for too long. Joe Biden’s voters no longer listen to him.

Last night as the President spoke, a group of Biden voters gathered outside the White House to threaten and intimidate anyone who dare support Donald Trump.

They waited to ambush attendees as they came out of the convention. The Mayor of Washington, an incompetent hack called Muriel Bowser, made all of this possible. Bowser has been on the mob’s side since the very first day.

She allowed the mob to harass and terrify elderly taxpayers as they walked on city streets they pay for. Watch this.

Law enforcement in Washington, D.C., as in so many places controlled by the Democratic Party, has become completely politicized just as it is in the third world.

Last night, things fell apart so quickly outside the White House that the Secret Service told Kentucky Senator Rand Paul and his wife, Kelley, and two of their friends to get on a bus and leave the immediate area.

The senator then planned to get an Uber back to his hotel, but the streets were blocked, and no one would let them through. That’s when Rand Paul was attacked along with the officers protecting him. Watch.

CARLSON: These people are not only violent. They’re incredibly stupid. They are mouth breathers. They’re morons. They had nothing.

Say her name, they shouted at Rand Paul. They were talking about Breonna Taylor, a Kentucky woman who was killed in a no-knock police raid when the police came under fire.

In fact, as it happens, Rand Paul, himself authored a bill to end no-knock police raids, and that bill was literally called the Justice for Breonna Taylor Act.

Irony of ironies, but it didn’t matter. Paul has had to face political violence before. In 2017, he was nearly murdered by a Bernie Sanders supporter, then he was attacked by his neighbor apparently for political reasons and had to have part of his lung removed. It took months to get better.

We’ll talk to Rand Paul in a minute about what happened last night, but he was not the only one attacked. A van carrying Fox News staff, just technical people mostly doing their jobs, non-political people was blocked and boarded in the middle of a city street. Watch.

CARLSON: We want to be clear, we don’t think the van was targeted because Fox News employees were inside. It seems like the Biden voters were pounding on it had no idea who was riding it. They didn’t care.

Their assumption seemed to be that everyone in a motor vehicle is an agent of white supremacy. Certainly, they think that of anyone in uniform.

Watch as BLM lunatics attack a black cop in Washington this morning.

UNIDENTIFIED MALE: Traitor. Traitor, that’s what you are.

CARLSON: This isn’t happening by accident. It didn’t happen five years ago. It’s happening now not because police are more brutal or more unarmed African-American men are being killed by the police. That’s not happening. It’s a total hoax.

It’s happening because Democrats, the leadership of that party, are encouraging it and have been for quite some time. Here is Massachusetts Congresswoman Ayanna Pressley openly calling for violence in the streets early this month. Watch.

REP. AYANNA PRESSLEY (D-MA): Hold them accountable. Make the phone calls, send the e-mail. Show up. You know, there needs to be unrest in the streets for as long as there’s unrest in our lives. And unfortunately, there’s plenty to go around.

Pressley, like Nancy Pelosi and Barack and Michelle Obama and so many other leaders in that party, is a racial arsonist. She wants Americans to despise and fear each other. She is pleased when things burn.

Pressley has no skill. She has never created anything in her life. She has built nothing.

Tearing things down is the only way Ayanna Pressley and people like Ayanna Presley become powerful, and so they push hate and chaos.

Republicans for all their many and very obvious faults, many of which we point out on this show, don’t do this. They don’t do anything like this.

When was the last time a mob of Trump voters torched a Wendy’s or looted a Target? And if you did, if you watched them do that, how would you feel about it? You’d be repulsed.

Do you think Republican leaders would defend Trump voters if they did that? Do you think they’d encourage them to do it again? Please. That’s a rhetorical question. You know the answer. It’s obvious.

Only Biden voters do this. Only the left does this, and they’ve done it for a long time.

A year ago, this month, for example, they gathered outside Mitch McConnell’s home where his family lives. Do you even remember what this was about? Watch.

He’s in there nursing his little broken arm. He should have broken his little raggedy wrinkled ass neck.

UNIDENTIFIED FEMALE: Just stab the mother (bleep) in the heart.

CARLSON: Just stab the MFer in the heart. They mocked the 77-year-old McConnell, who was recovering from surgery. They said that out loud, it was on tape. We probably played it at the time. We didn’t take it seriously, though.

The rest of us should have stopped what we were doing that day and demanded — demanded from law enforcement, demanded from Democratic leaders an end to the threats, to the lunatic behavior, to the implied violence. None of that has any place in a civilized country, much less this country.

But we didn’t do that. We let it pass. We ignored it over time. And so the threats continued, and then the threats became violence as they inevitably do.

The question now is can we stop it?