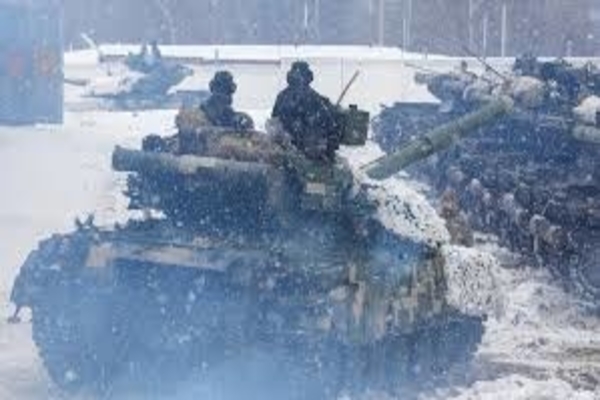 Maliar conceded these estimates were “approximate” and difficult to verify while combat is still ongoing. She said her ministry is receiving data from the battlefield “the next day,” and sometimes a day later.

Armed Forces Ukraine made a similar claim of casualties and equipment destroyed on Twitter, presumably relying on the same data as the deputy defense minister.

Kharkiv Mayor Oleh Sinegubov claimed on Sunday night that Ukrainian forces repelled a major offensive and completely wiped out the invading force, capturing dozens of Russian troops and their equipment.

“Control of Kharkiv is completely ours” after Ukrainian forces completed “a full clearing of the city of the enemy,” said Sinegubov.

The Russian military made its first admission of casualties on Sunday, although it did not offer any numbers of dead and wounded, or an inventory of equipment captured or destroyed by the Ukrainians.

Russian Defense Ministry spokesman Maj. Gen. Igor Konashenkov acknowledged “there are dead and wounded among our comrades,” but insisted Russia’s losses are “many times” smaller than casualties suffered by the Ukrainians.

Konashenkov saluted the “courage and heroism” of Russian forces and claimed the Ukrainians are torturing their prisoners, an offense he vowed to avenge.

“All faces, voices, phones, their coordinates, IP addresses, as well as correspondence of all Ukrainian Nazis involved in the torture of our comrades have been recorded and identified. This also applies to the leaders of the Kyiv regime and their perpetrators, who directly call for bullying of Russian servicemen in violation of the convention on the treatment of prisoners of war. All of you will be found and will inevitably bear severe responsibility,” he said.

“Just today, 7 anti-aircraft missile systems were destroyed, including one S-300 near the city of Kramatorsk,” he said.

Outside observers have not been able to confirm either Ukrainian or Russian claims. At a U.S. Department of Defense (DoD) briefing on Sunday, senior American military officials said the Ukrainians are putting up “stiff resistance,” while Russia is facing “fuel and logistics shortages,” especially in their attack on the vital Ukrainian city of Kharkiv and their drive to reach the capital of Kyiv.

“We still, as of this morning, have no indication that the Russian military has taken control of any cities,” DoD said, contradicting Russian claims to the contrary.

“The airspace over Ukraine is still contested. And that means that the Ukrainians are still using both aircraft, and their own air and missile defense systems, which we believe are still intact and still viable,” DoD noted, lending some credibility to Ukrainian claims of destroying Russian planes and missile launchers.

U.S. officials offered some interesting observations on Russia’s heavy reliance on short-range ballistic missiles (SRBMs), noting that over 320 have been launched against targets in Ukraine – possibly the heaviest SRBM cross-border bombardment in history – but the effect on Ukrainian defenses seems considerably less than Russia anticipated. The Russians are therefore adopting “siege tactics” around Ukrainian cities, which could create a humanitarian crisis.

“We have seen some indications that they have experienced failures in some of these launches, that not all missiles have launched effectively,” DoD said.

“I would tell you that our best estimate is that they did not anticipate the level of resistance that they were going to encounter,” a senior defense official said, while cautioning that Russia still has vast amounts of combat power it could move into Ukraine.

Some independent military analysts believe Ukraine is essentially correct about inflicting disproportionate and unexpected casualties on the Russian invasion force – and that could be bad news for Ukrainian citizens, because the Russian military might abandon the precautions it has thus far taken to minimize collateral damage.