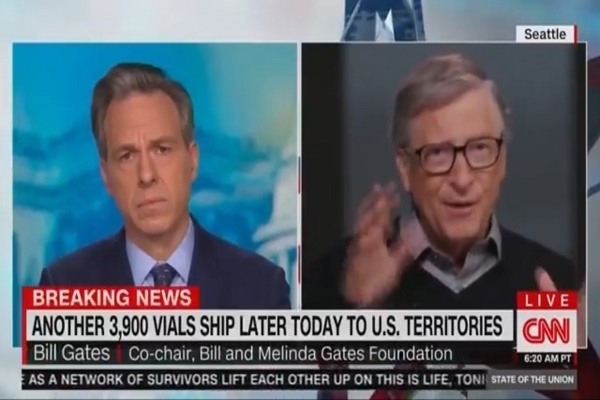 (informationliberation) – Bill Gates suggested during an interview with CNN on Sunday that life will not be allowed to return to “normal” even “through early 2022” and proclaimed that over the next 4 to 6 months “bars and restaurants in most of the country will be closed.”

From The Daily Wire:
“Well, certainly, mask-wearing has essentially no downside. They’re not expensive,” Gates told Tapper. “Bars and restaurants in most of the country will be closed as we go into this wave. And I think, sadly, that’s appropriate. Depending on how severe it is, the decision about schools is much more complicated, because, there, the benefits are pretty high, the amount of transmission is not the same as in restaurants and bars.”

He continued, “So, trade-offs will have to be made. But this — the next four to six months really call on us to do our best because we can see that this will end, and you don’t want somebody you love to be the last to die of coronavirus.”

When asked when life will be getting back to normal, Gates claimed, “Certainly by the summer, [we’ll] be way closer to normal than we are now.”

“But even through early 2022, unless we help other countries get rid of this disease, and we get high vaccination rates in our country, the risk of reintroduction will be there and, of course, the global economy will be slowed down, which hurts America economically in a pretty dramatic way,” he continued. “So, we’ll have, starting in the summer, about nine months where a few things, like big public gatherings, will still be restricted. But we can see now that, somewhere between 12 to 18 months, we have a chance, if we manage it well, to get back to normal.”
Pfizer’s experimental, first-ever mRNA vaccine to be authorized for use in humans was approved on Friday after President Trump’s chief of staff Mark Meadows reportedly threatened the head of the FDA that he would be fired by the end of the day if he didn’t grant an emergency use authorization for the vaccine.

In the past, President Trump voiced vaccine skepticism and even invited Robert Kennedy Jr. to the White House in early January 2016 to meet with Anthony Fauci and other top officials to create a commission to look into vaccine safety.

Bill Gates told MSNBC in 2018 he personally told Trump to scrap the plan:

RFK Jr. said in an interview in January earlier this year that Trump got a $1 million contribution from Pfizer towards his inauguration “immediately after” their meeting and then he “took people who were vaccine lobbyists [and] appointed them to the highest positions at CDC and HHS and we were cut off.”

Today, Trump is fully on board with rushing vaccines out at “warp speed.”

The Trump administration had issued a directive to vaccinate top government officials in the coming days but Trump changed course on Sunday after receiving criticism.

“People working in the White House should receive the vaccine somewhat later in the program, unless specifically necessary,” Trump tweeted. “I have asked that this adjustment be made. I am not scheduled to take the vaccine, but look forward to doing so at the appropriate time.”

Pfizer reported that out of the 43,000 people who have taken their vaccine in their trial, 3.8% experienced a “Grade 3 adverse event” (defined as severe and preventing daily activity), which is 1,634 people.

Many trial volunteers reported having “intense symptoms” after the second dose of Pfizer’s two-dose regimen.

One Pfizer vaccine trial volunteer, who told CNBC he signed up for the trial because he’s “pro science,” reportedly “woke up with chills, shaking so hard he cracked a tooth.”

“It hurt to even just lay in my bed sheet,” the volunteer told CNBC last week.

The UK last week warned that the Pfizer vaccine “shouldn’t go to people with a history of severe allergies, after two medical staffers came down with severe reactions,” NPR reported.

Pfizer CEO Albert Bourla sold the majority of his Pfizer stock on November 9th — the same day his company announced their vaccine was supposedly 90% effective.

The New York Times reported Sunday that nearly 3 million doses of Pfizer’s vaccine are “expected to reach all 50 states this week.”

How many Americans are going to take the vaccine remains to be seen.