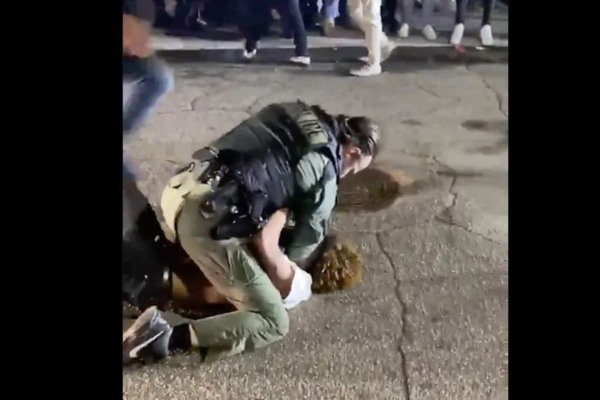 At the time of this writing, the video has been viewed more than 1.9 million times.

What are the details?

Throughout the 51-second video, two younger males can be seen pummeling each other on a public street. What appears to be a police officer rushes the two and deftly breaks up the fight.

The apparent aggressor begins hitting and swinging at the officer, but the officer appears to respond only with defensive action and is ultimately able to subdue the suspect.

At the end of the video, the police officer helps the young suspect to his feet and claps him on the back as they put their arms around each other and breathlessly walk away from the scene.

TheBlaze has reached out to the social media user responsible for sharing the video in order to receive more details.

The user told TheBlaze that the incident recently took place in the Buckhead neighborhood of Atlanta, Georgia, and escalated after the two men in the beginning of the video engaged in a verbal disagreement.

TheBlaze has reached out to the Atlanta Police Department for comment on the matter, but did not receive a response at the time of publication.

Anything else?
Atlanta InTown reported that the Atlanta police are investigating another brawl that took place in nearby neighborhood Atlantic Station.

Police said that the large-scale fight involved “more than 300 teenagers” on Friday.

At least one teenager was arrested in connection with the incident, according to Atlanta InTown.

“Social media video showed a large group of teens fighting on 17th street with one child being knocked to the ground and kicked by a group of others,” the outlet reported. “Police suggested that the teens had gathered to fight as part of an ‘ongoing dispute,’ but did not elaborate.”