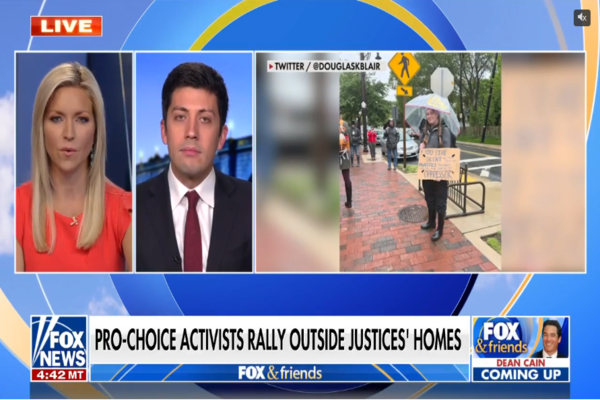 (foxnews) – The White House condemned violent protests and vandalism Monday, and demanded that judges be able to “do their jobs without concern for their personal safety,” as demonstrations over the weekend extended from churches to the homes of Supreme Court justices amid fallout following the release of a draft opinion signaling the high court’s intent to overturn Roe v. Wade.

“But that should never include violence, threats, or vandalism,” Psaki tweeted. “Judges perform an incredibly important function in our society, and they must be able to do their jobs without concern for their personal safety.”

According to federal U.S. code 1507, any individual who “pickets or parades” with the “intent of interfering with, obstructing, or impeding the administration of justice, or with the intent of influencing any judge, juror, witness, or court officer” near a U.S. court or “near a building or residence occupied or used by such judge, juror, witness, or court officer” will be fined, or “imprisoned not more than one year, or both.”

Pro-choice groups protested outside the homes of Supreme Court Chief Justice John Roberts and Justice Brett Kavanaugh over the weekend.

The group “Ruth Sent Us,” which is named after late Justice Ruth Bader Ginsburg, had called on abortion supporters to gather outside the homes of the “six extremist Catholics set out to overturn Roe” and “stand at or in a local Catholic Church” on Mother’s Day.

Meanwhile, the group “Shutdown D.C.” is expected to stage a protest outside the home of Justice Samuel Alito on Monday evening. Alito authored the majority draft opinion, which was leaked to the public last week.

“We hold that Roe and Casey must be overruled,” Justice Samuel Alito writes in the document, labeled the “Opinion of the Court” for the case Dobbs v. Jackson Women’s Health Organization. “It is time to heed the Constitution and return the issue of abortion to the people’s elected representatives.”

Should Roe v. Wade be overturned, abortions would be left for the states to decide.
placeholder

Alito notes that at the time the court decided Roe, 30 states had active bans on abortion throughout pregnancy. Alito also wrote in the draft opinion that Americans hold “sharply conflicting views” on the subject.

“Some believe fervently that a human person comes into being at conception and that abortion ends an innocent life. Others feel just as strongly that any regulation of abortion invades a woman’s right to control her own body and prevents women from achieving full equality. Still others in a third group think that abortion should be allowed under some but not all circumstances, and those within this group hold a variety of views about the particular restrictions that should be imposed,” Alito wrote.

Meanwhile, outside of the nation’s capital, an arsonist threw at least one Molotov cocktail into an office of Wisconsin Family Action (WFA), a pro-life activist group. Police are investigating the incident as arson and connected it to the aftermath from the leaked draft opinion.

The president “strongly” condemned the attack and “political violence of any stripe.”

“The President has made clear throughout his time in public life that Americans have the fundamental right to express themselves under the Constitution, whatever their point of view,” the White House said in a statement. “But that expression must be peaceful and free of violence, vandalism, or attempts to intimidate.”

The Supreme Court last week acknowledged that “a copy of a draft opinion in a pending case” was published.

“Justices circulate draft opinions internally as a routine and essential part of the Court’s confidential deliberative work,” the high court said in a statement. “Although the document described in yesterday’s reports is authentic, it does not represent a decision by the Court or the final position of any member on the issues in the case.”

Roberts also released a statement Tuesday saying that the court “will not be affected in any way” by the leak.

“To the extent this betrayal of the confidences of the Court was intended to undermine the integrity of our operations, it will not succeed,” the chief justice said. “The work of the Court will not be affected in any way.”