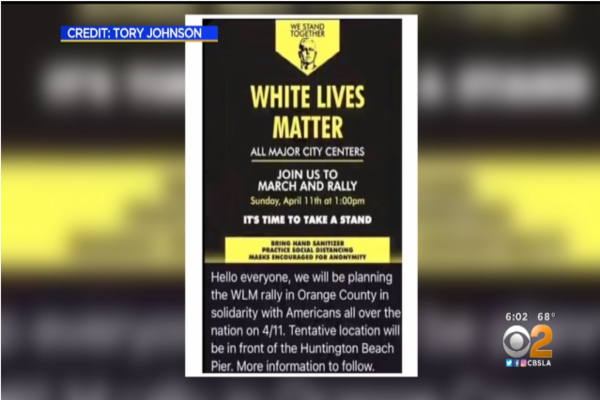 (washingtonexaminer) – At least a dozen demonstrators were arrested in Huntington Beach, California, after police declared an “unlawful assembly.”

“White Lives Matter” flyers promoting the event say the assembly was scheduled to take place at 1 p.m., but nobody gathered at that time, according to police.

“We’ve attempted to identify an organizer or a leader or even who first did the initial post, but we were unable to establish that,” Lt. Brian Smith told the outlet.

About an hour after the reported rally was scheduled to begin, counterprotesters far outnumbered White Lives Matter protesters, and police then declared an unlawful assembly in the area of 5th Street and Walnut Avenue, according to CBS Los Angeles.

“They’re not sending their best,” she said.

Racial tensions are simmering throughout the nation as Derek Chauvin, the police officer facing two counts of murder and one count of manslaughter for the death of George Floyd, stands trial in Minneapolis. The high-profile trial will enter its third week on Monday, with several more witnesses expected to testify.

Representatives for the Huntington Beach Police Department and Squire did not immediately reply to the Washington Examiner’s requests for comment.