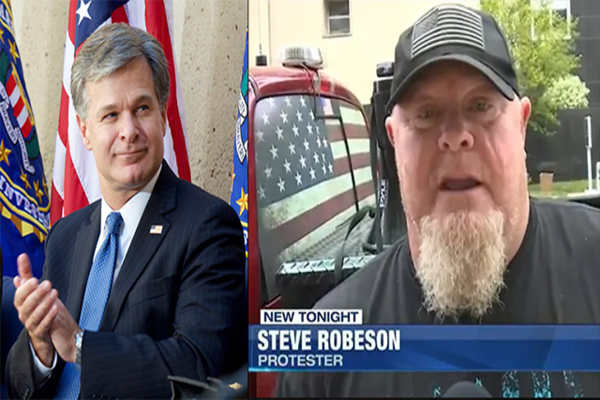 (informationliberation) – An FBI informant suspected of being the driving force behind the alleged plot to “kidnap” Michigan Governor Gretchen Whitmer was quietly hit with a gun charge by the feds last week — potentially signalling the government’s suspected entrapment scheme that ensnared the “Wolverine Watchmen” militia may be falling apart.

Though prosecutors have secured the conviction of plotter Ty Garbin of Hartland Township and compiled evidence that includes secretly recorded audio, video and more than 13,000 text messages, new criminal charges against a confidential informant could be exploited by defense lawyers.

An indictment after a prolonged period of cooperation suggests the relationship between Robeson and the FBI is destroyed and that prosecutors do not plan on using him at trial, legal experts said. But defense lawyers can try to call him as a witness and attack Robeson’s credibility.

“This gives defense lawyers ammunition to create reasonable doubt,” said Andrew Arena, former special agent in charge of the FBI office in Detroit. “It could be he broke bad on them during the investigation.

“It’s a difficult proposition when you are using these guys. You’re telling them don’t commit crimes, you’re doing everything to keep on top of them. But you’re not with them 24 hours a day.”
It seems more likely that the feds are only indicting Robeson as a form of witness intimidation because they fear he could testify against them and expose their entrapment scheme in court.
[…] Three sources familiar with the investigation identified Robeson as one of the government’s undercover informants. Robeson attended and organized combat training in Wisconsin, participated in a June 2020 meeting in Dublin, Ohio, that served as a catalyst for the kidnapping plot, and he also attended a camp in northern Michigan where accused plotters underwent combat training, according to the sources.

The one-paragraph indictment of Robeson on March 3 does not mention the Whitmer case, and it was filed five months after FBI agents say they thwarted a kidnapping plot that involved at least 14 people. The indictment alleges Robeson, a career criminal, possessed an Armalite .50-caliber sniper rifle […]

Defense lawyers have portrayed their clients as tough talkers who were exercising First Amendment rights who never carried out any kidnapping plot.

“If Steve Robeson is at this meeting, he’s the person who’s driving this and inviting people and funding it,” Blanchard said.
As I noted when this story broke in October right before the election, the FBI’s affidavit revealed they had multiple informants and undercover agents involved in this operation going all the way back to June.

They could have arrested everyone months before the election but instead they chose to wait and drop the indictments as an “October surprise.”

I predicted such a plot was going to happen two days before the story broke.

Robeson also appears to have infiltrated an anti-mask protest in July for the feds:
Last year, he drew public attention for protesting a mask mandate. He was interviewed by a local TV reporter as part of a story about protests at the Wisconsin state Capitol, where protesters spent two hours marching outside Gov. Tony Evers’ office windows.

“We understand the virus. We understand what it is,” Robeson said during the protest. “Why are we shutting our country down and restricting our movement?”
“Court documents indicate that Robeson came in contact with the militants during a pro-2nd Amendment meeting in Dublin, Ohio,” Big League Politics reported. “Adam Fox, who has been alleged to be a homeless mentally-ill man, was propped up as the patsy to lead the efforts.”

There’s a certain percentage of any population that is highly suggestible, highly gullible, very low IQ and fraught with mental issues.

The feds should be helping these people stay out of trouble rather than entrapping them in phony terrorism plots to try and justify stripping Americans of their rights!