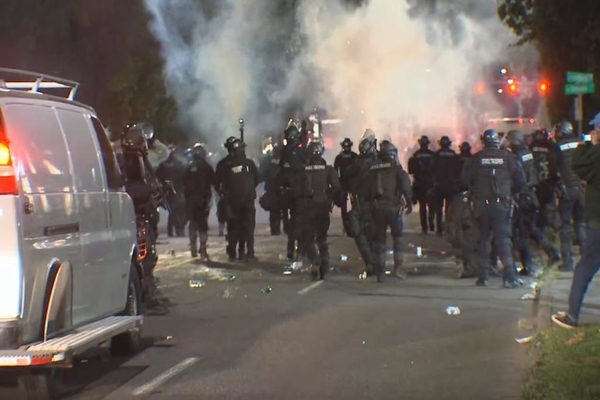 (breitbart) – Two men who teach about criminal justice are speaking out about the use of the word “looting” to describe the ongoing crime spree by groups of individuals who are breaking in o luxury retailers in California to steal merchandize – claiming the term is a racist.

“Looting is a term that we typically use when people of color or urban dwellers are doing something,”  Lorenzo Boyd, a professor of criminal justice & community policing at the University of New Haven and a former police office, told ABC 7.

“We tend not to use that term for other people when they do the exact same thing,’ Boyd said.

Martin Reynolds, co-executive director of the Robert C. Maynard Institute of Journalism Education, also lashed out at using the term because it signals “the depiction of the flash mobs running roughshod through the aisles of Louis Vuitton and other retailers.”

“This seems like it’s an organized smash and grab robbery,’ Reynolds said. “This doesn’t seem like looting. We’re thinking of scenarios where first responders are completely overwhelmed. And folks often may be on their own.”

The U.K.’s Daily Mail reported on the semantics debate:

Their comments come after at least seven robberies involving gangs with as many as 50 thieves ransacked California stores, and each individual could avoid heavy criminal charges due to the state’s 2014 law dictating that anyone caught shoplifting items whose value does not exceed $950 would be only charged with misdemeanors.

Some experts fear that the law is being abused by organized crime rings who might be the true masterminds behind the gang of thieves, paying the low-level criminals to commit mass crimes for them in exchange for a slap on the wrist.

The distinction in terminologies originates from the California penal code, which defines looting as ‘theft or burglary… during a ‘state of emergency,’ ‘local emergency’ or ‘evacuation order resulting from an earthquake, fire, flood, riot or other natural or manmade disaster.’ The term ‘looting’ gained infamy when it was predominately used to describe black survivors of Hurricane Katrina who stole water and other basic goods from local stores to survive through the aftermath of the storm.

The Mail report noted that “no local or national emergency has been declared for the Bay Area, where much of the crime has taken place.”

Boyd blames the media of using the word “looting” to politicize that crime wave by connecting it to Kyle Rittenhouse, who was found not guilty in the death of two men while acting in self-defense.

On social media, critics from both politics and media seethed at what they saw as an attempt by these experts and other woke media organizations to whitewash the recent crime wave.

Other conservatives took to social media to weigh in on the debate.

Dinesh D’Souza tweeted, “Experts refuse to call a spade a spade, unless, of course, it’s a spade wielded by a white male.”

Ex-Wisconsin Republican Governor Scott Walker cut to the chase: “It’s looting. Just like there were riots in Kenosha, not just protests.”

The widespread crime wave forced Democrat California Gov. Gavin Newsom to say on Monday that the state would get tough on lawbreakers despite a 2014 law that barred prosecutors from charging people suspected of shoplifting with felonies.

“After Proposition 47 was approved by voters, anyone caught shoplifting items not exceeding $950 would be charged with misdemeanors,” the Mail reported. “But critics said the measure encouraged the rampant organized retail theft, with gangs of thieves filmed smashing glass cases at a jewelry store and snatching garments from upmarket yoga clothing brand Lululemon on Sunday — one day after others were filmed swarming a drug store and stealing prescriptions.”