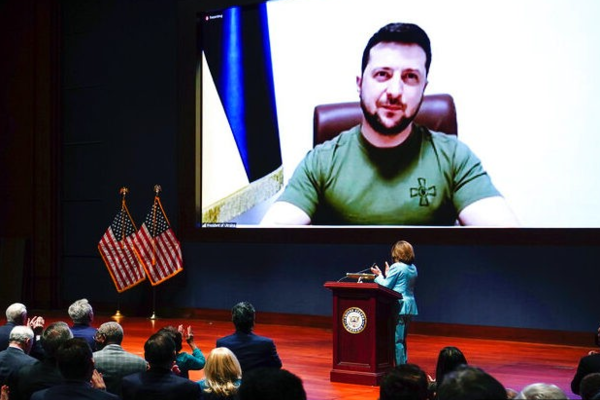 “United States and NATO military leaders must be reminded to take every precaution to avoid escalations that will result in war with Russia and American soldiers being put in harm’s way,” Sen. Mike Braun (R-IN) said in a statement.

Rep. Emanuel Cleaver (D-MO) reminded that escalations could turn into “World War III,” though “it’s hard not to be moved his words,” he said.

“It’s kind of sad because he made a request that I don’t think we can honor, which is the no fly zone,” he added.

Rep. Thomas Massie (R-KY) suggested that imposing a “no-fly zone” over Ukraine is a “euphemism” for “’a military battle between Russia and the U.S. in Europe,’” he said.

“It’s not some sort of gentleman’s agreement. It would literally mean Russian planes being shot down by U.S. forces and the retaliation that would ensue,” Massie explained.

Former Director of National Intelligence Richard Grenell pointed out that the media is driving much of the hysteria about the Ukrainian war while other wars are also waging.

“Zelenskyy’s speech missed the chance to explain the difference between Ukraine and Iraq/Afghanistan. Americans are tired of war and its costs,” Grenell said. “While my heart breaks for the people and I’m angered by Putin, if the media descended on the Congo, our hearts would be broken too.”

“The question for our leaders is: what is best for Americans? This is their job. We can and do stand for democracy and human rights around the world. But too many politicians think that means we have to act militarily in every crisis,” Grenell continued. “Republican House leaders are too emotional about these serious decisions. They should demand tough diplomacy – America can lead outside of the Pentagon, too.”