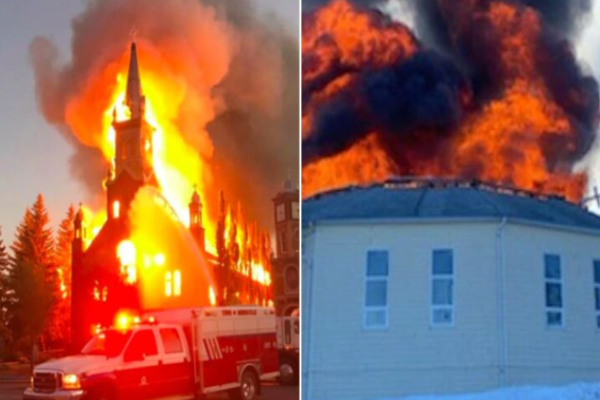 (bigleaguepolitics) – The Catholic Church is groveling and offering to pay reparations after a blood libel prompted the burning of dozens of churches across the nation of Canada.

“This expresses the commitment of the Diocese to the ongoing work of justice and healing in our country with the Indigenous Peoples and their communities,” the Roman Catholic Diocese of Calgary wrote in a statement.

Of course, the Indian activists are not satisfied with the proposed reparations. They will demand more and more, as nothing will ever be enough until society is completely looted and destroyed and returned to the squalor that is seemingly preferred by the natives.

“They should be helping this process instead of just [giving] a bit of money and an apology,” said Linda ManyGuns, the associate vice-president of indigenization and decolonization at Mount Royal University.

“Pay for our culture to get back, pay for our languages to get returned,” she added.

The National Centre for Truth and Reconciliation said that 4,100 children died at residential schools in Canada where natives were assimilated into civilization. Blood libels have been spread about these children being murdered, rather than dying from disease or drought, to justify the burning of churches across the nation as part of the globalist-inspired rape of civilization that has been wrought throughout the world.

Big League Politics has reported on how Canadian Prime Minister Justin Trudeau justified the terror against Catholic churches as part of the satanic Great Reset agenda that he is pushing:

“Canada has recently seen a rise in burnings of religious buildings, with several Catholic churches reportedly having been burned following ths discovery of more than 1,100 unmarked graves at the sites of three former residential schools run by the church in British Columbia and Saskatchewan that generations of Indigenous children had reportedly been forced to attend.

On Friday Canadian Prime Minister Justin Trudeau told reporters it is “unacceptable and wrong that acts of vandalism and arson are being seen across the country including against Catholic churches” — but quickly added “One of my reflections is I understand the anger that’s out there against the federal government, against institutions like the Catholic church; it is real and it is fully understandable given the shameful history that we are all becoming more and more aware of, and engaging ourselves to do better as Canadians.”

Trudeau then added that he could not “help but think that burning down churches is actually depriving people who are in need of grieving and healing and mourning from places where they can actually grieve and reflect and look for support.”

“We shouldn’t be lashing out at buildings that can provide solace to some of our fellow citizens, but we should be every day committing ourselves, each and every one of us, to the hard work we need to do to actually rebuild a path forward that reflects the terrible intergenerational trauma and present-day realities of suffering that we are all collectively responsible for,” he then said.

When reacting to the church burnings in a seperate interview, the Candian Prime Minster called on Pope Francis to apoligize for ‘trauma’ the Catholic Church brought upon tribal natives, seemingly suggesting it as a potential motive for the crime.

Per Breitbart News, a majority Roman Catholic and Anglican churches have recently been vandalized in large numbers, with the province of Alberta seeing 10 affected churches in a single day.”

The Catholic Church is a dying institution, appeasing terrorists while cracking down on the traditional Latin mass, and deservedly so considering the immense cowardice of church leadership.