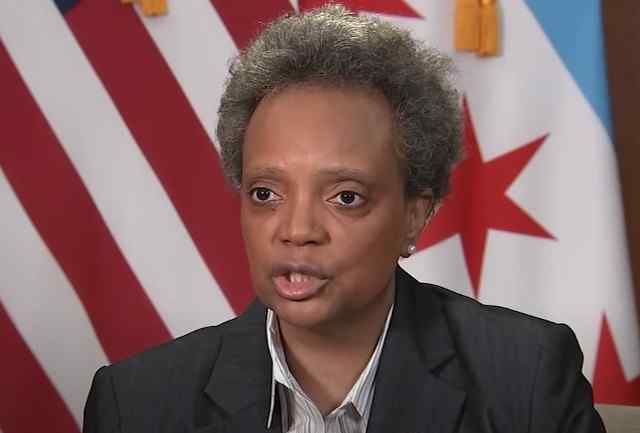 (Breitbart) – On Sunday, Chicago’s first openly gay mayor, Lori Lightfoot, mounted a raid on a black South Side church for holding services in defiance of her coronavirus lockdown orders.

Lightfoot reportedly sent three marked squad cars and two unmarked cars full of officers to the Chicago Cornerstone Baptist Church in the South Side’s Woodlawn neighborhood. Woodlawn is just south of Hyde Park, the area in which the Obamas lived for a short time before Barack became president.

The pastor of the mostly black congregation, Courtney Lewis, reportedly shut and locked the doors and refused to allow the officers to gain entry to the building, Todd Starnes reported.

Pastor Lewis told Starnes that he felt like he was confronting “the Soviet-style KGB” as the officers pounded on his doors and demanded entry to shut the church down.

“Thankfully, our doors were locked as a normal safety precaution we take each service to protect our members from the escalating gun violence in Chicago,” Lewis said.

A sentry that is usually posted outside the sanctuary to monitor the street during service also reported seeing occupants of a dark car with tinted windows filming the incident through one opened window.

“All we are seeking is the same consideration and trust that is being tendered toward the liquor stores, abortion clinics, and Walmart,” Lewis told Starnes.

Lightfoot, Chicago’s Mayor since May of last year, has been targeting the city’s churches for several weeks as houses of worship have begun balking at her draconian lockdown orders.

Late last week, Lightfoot excoriated the city’s churches, saying that their desire to re-open is “dangerous and foolish.”

Also last week, the city began fining churches that Lightfoot thinks are violating her coronavirus lockdown orders. After some churches started holding services on the second weekend of May, fines were handed out to churches, including Philadelphia Romanian Church of God, Elim Romanian Pentecostal Church, Metro Praise International, and others.

Law service Liberty Counsel reported on May 23 that Elim Pentecostal Church and other Romanian churches in the city received letters from the Chicago Department of Public Health, invoking emergency orders and deeming churches a danger to society.

The letters also invoked “summary abatement,” which gives the city the power to forcibly enter properties without a judge’s orders and impose the mayor’s will on occupants.

On Friday, President Donald Trump updated federal guidelines for re-opening the economy and added that churches are essential institutions and should be allowed to re-open without government opposition.

“Today, I am identifying houses of worship, churches, synagogues, and mosques as essential places that provide essential services,” Trump said on Friday, announcing the release of new Centers for Disease Control and Prevention (CDC) guidelines.

A similar flurry of harsh orders has come from the state’s governor, as well. Illinois’s recently elected Gov. J.B. Pritzker, heir to the billion-dollar Hyatt Hotel chain, continues to maintain that Illinois must remain on near-total lockdown as a measure to stave off the coronavirus.

Pritzker, who has instituted the most draconian lockdown in the country, recently decreed that churches must not allow more than 50 worshippers inside at a time, “until there is a vaccine” for the coronavirus.

Meanwhile, Pritzker took criticism for demanding that everyone stay at home even as he allowed his wife to fly off to their Florida estate where lockdowns are not as strict. He was also caught ordering construction crews from Illinois to travel to Wisconsin to work on his property there despite those strict stay-at-home orders he was doling out to his constituents.

But Pritzker is facing mounting pressure to roll back his authoritarian coronavirus policies. Last Wednesday, the governor succumbed to pressure to cancel his order to criminally charge businesses that opened their doors in defiance of his coronavirus orders.

Illinoisans are becoming increasingly restive under Pritzker’s rule. Multiple lawsuits have been filed against the state’s coronavirus decrees, and many county governments are shying away from the lockdowns. A growing number of county sheriffs and board members are refusing to enforce the governor’s orders.