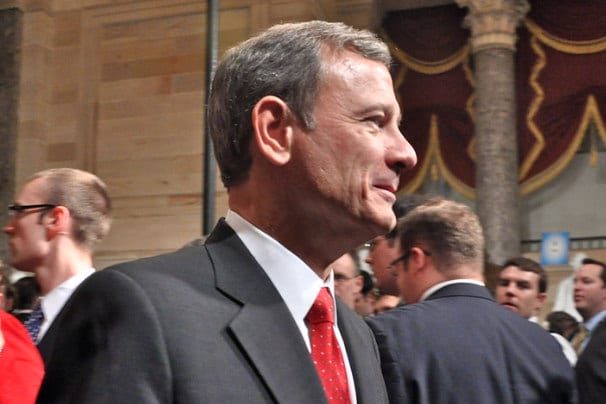 (Breitbart) – We all owe Chief Justice John Roberts a big thank you for confirming the name of the phony, Deep State whistleblower who launched this stupid impeachment hoax.

Eric Ciaramella, a CIA analyst and raging partisan who falsely accused President Trump of impeachable crimes, who has a history of working with former Vice President Joe Biden, and who might have had his own agenda in wanting Biden’s corruption in Ukraine covered up… Yep, that’s him.

After much speculation that Ciaramella is the guy, Roberts confirmed it Thursday through his unconstitutional act of commission.

The question was for House manager Rep. Adam Schiff (D-CA), whose staff worked with Eric Ciaramella to cobble together this hoax by way of a fake whistleblower complaint.

It was a simple and relevant question:

To the Manager Schiff and counsel for the President:

Manager Schiff and Counsel for the President, are you aware that House Intelligence Committee staffer Shawn Misko had a close relationship with Eric Ciaramella when at the National Security Council together, and are you aware and how do you respond to reports that Ciaramella and Misko may have worked together to plot impeaching the President before there were formal House impeachment proceedings?”

Roberts, who has no authority to do so, refused to read the question.

Because, without any authority, he said he would not read questions that reveal the name of the whistleblower.

And so, by refusing to read this question, this specific name, Roberts confirmed the whistleblower is, indeed, one Eric Ciaramella.

For his part, Sen. Paul who, unlike Roberts, is an elected official, was not amused. He tweeted:

My question is not about a “whistleblower” as I have no independent information on his identity. My question is about the actions of known Obama partisans within the NSC and House staff and how they are reported to have conspired before impeachment proceedings had even begun. [A]nd are you aware and how do you respond to reports that Ciaramella and Misko may have worked together to plot impeaching the President before there were formal house impeachment proceedings.

What’s more, by unilaterally refusing to allow valid questions like this one, Roberts is rigging the trial against Trump.

The Senate is the jury. Paul is a member of that jury. So it is not only outrageous not to allow a juror to ask a question; it is also a violation of the Sixth Amendment not to allow the president to face his accuser, to question and cross-examine his accuser.

No legitimate jury in the world can make a fair ruling without a good look at the accuser.

What’s more, it is not even Roberts who would be revealing the name; it is the senator asking the question revealing the name. Roberts is merely reading someone else’s question, which proves his motives are not only partisan, but one more example of the chief justice fabricating something out of whole cloth to benefit Democrats.

After all, this is the same President John Roberts who singlehandedly rewrote the unconstitutional Obamacare mandate into a “tax” — something the lawmakers who wrote the Obamacare law specifically said it was not — just so he could protect Barack Obama’s signature policy.