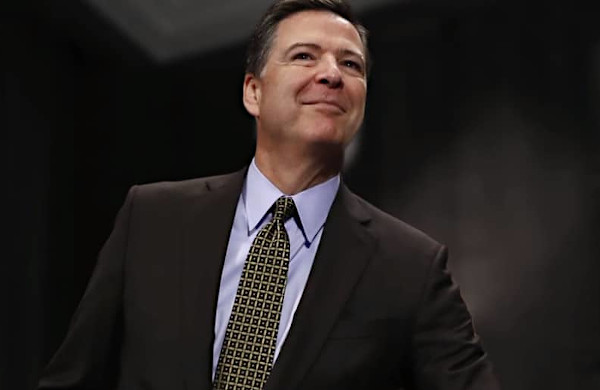 (Gateway Pundit) – Comey’s Crossfire Hurricane team inserted blank pieces of paper into an FBI file used to document support for the FISA warrants on Carter Page which was cited in a barely-noticed footnote in Horowitz’s report.

According to the footnote in Horowitz’ report, the “placeholders” did not meet the Woods requirements.

In total, the appendix to Horowitz’s report identified a total of 51 Woods Procedures violations by Comey’s FBI.

The “Woods Procedures” were designed to protect American citizens to “ensure accuracy with regard to … the facts supporting probable cause” after recurring abuses where the FBI presented inaccurate information to the FISC.

Congressman Nunes’ 2-page FISA memo released in February of 2018 suggested Comey’s cabal violated the Woods Procedures — and he was correct.

“The Woods File for Renewal Application No. 2 contains a piece of paper that states “Strat Plan” and another piece of paper that states “New 302,” “Feb Article,” and “March Article.” The case agent who compiled the Woods File for this application told us that these pieces of paper were “placeholders” he inserted into the file to indicate to the SSA reviewer that a supporting document existed, but that a copy of it was not placed into the file.” The footnote on page 420 of Horowitz’s report referring to the second Carter Page FISA renewal stated.

The news of the “placeholders” was making the rounds on Wednesday and renewed calls for Attorney General Bill Barr to finally take action against Comey and his cabal.

“We do not believe these placeholders met the Woods requirements because the descriptions of the referenced documents were vague and it was not clear to us why the actual documents could not have been included in the Woods File. We also observed that there was no notation of other record indicating that the agent and supervisor performing the factual accuracy review in fact examined the documents identified by the placeholders.”

Another blank “placeholder” was inserted into the FBI file on the 3rd FISA renewal application, once again violating the Woods Procedures.

“Similar to the Woods File for Renewal Application No. 2, the file for Renewal Application 3 contains a “placeholder” piece of paper that states “Strat Plan,” indicating to the SSA reviewer that a supporting document existed for the factual assertion, but that it was not placed into the Woods File. For the reasons noted above, we do not believe this placeholder met the Woods requirements.” a footnote on page 422 of Horowitz’s report stated.

Despite the overwhelming evidence of crimes by Comey and the coup cabal, there have been ZERO indictments of the Deep State so far.