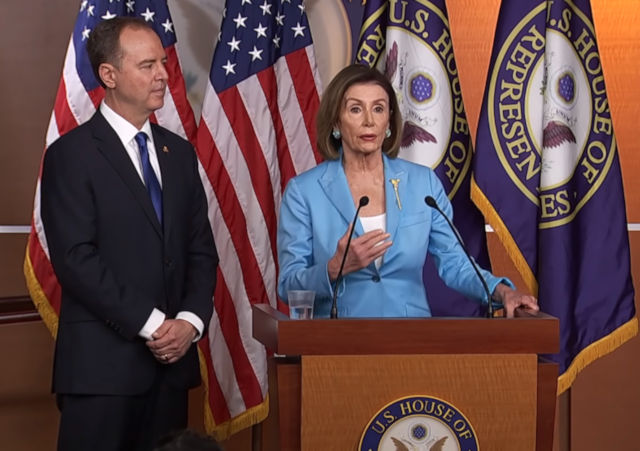 (Breitbart) – House Democrats revived the specter of impeachment for President Donald Trump if he moves forward with his order to defund the communist China-influenced World Health Organization (W.H.O.) for mismanaging and covering up the extent of the coronavirus outbreak during its early stages.

The Democrat lawmakers argued that Trump lacks the authority to halt congressionally-approved funding for the W.H.O., a component of the United Nations.

Trump has said he wants to pull funding from the W.H.O. because of the organization’s role in “mismanaging and covering up the spread of the coronavirus” during its early stages, a move that slowed the world’s response.

The president announced on Tuesday that he had ordered a halt on W.H.O. funding while his administration reviews the organization’s response to the coronavirus, described as lackluster by some administration officials.

On Wednesday, CNBC quoted Evan Hollander, a spokesman for the Democrat-led House Appropriations Committee, as declaring in a statement:

In a desperate attempt to deflect blame, President Trump is violating the same spending laws that brought about his impeachment. The president does not have the unilateral authority to withhold the United States’ assessed contribution to the World Health Organization.

Although the United States is the W.H.O.’s top source of funding, China appears to maintain more clout over the U.N. agency, particularly after helping put Tedros Adhanom Ghebreyesus, in power as the organization’s director. Tedros is a member of a Marxist-Leninist Ethiopian political party that analysts have listed as a perpetrator of terrorism.

House Democrats argued that suspending funding would hamper the global response to the disease ripping across the globe. They also contended he cannot withdraw money already appropriated by Congress under its constitutional authority — suggesting a court fight over Trump’s power looms if he pulls funding. … The [Democrat] party also raised the specter of the White House’s decision to withhold congressionally-approved military aid to Ukraine last year as Trump urged the country to investigate his political rival, apparent Democratic presidential nominee Joe Biden. The action led to the House impeaching Trump. The Senate acquitted him in February.

This is another case, as I have said, of the president’s ineffective response, that ‘a weak person, a poor leader, takes no responsibility. A weak person blames others.’ This decision is dangerous, illegal, and will be swiftly challenged.

In an apparent response to Pelosi’s criticism, Trump said via Twitter on Thursday, “She is totally incompetent and controlled by the Radical Left, a weak and pathetic puppet. Come back to Washington and do your job!”

U.S. lawmakers reportedly appropriated $122 million for the W.H.O. in the fiscal year 2020.

According to the Impoundment Control Act, Trump is allowed to withhold appropriated money as long as he gets approval from Congress within 45 days.

Referring to that law, CNBC noted:

The White House is set to use a broad interpretation of the law in arguing Trump can halt funding to the WHO. The administration will contend lawmakers approved the money within a pool of “global aid” funds, meaning he can redirect to another organization that meets the criteria, administration officials told CNBC. The WHO broadly works to expand health care services and help countries prepare and respond to emergencies. Losing American funding would hamper the agency: the U.S. gave an average of $446 million to the organization for 2018 and 2019 in both required and voluntary contributions, making up nearly 15% of its total budget.

A Breitbart News assessment found that the W.H.O. helped China hide the severity of the coronavirus outbreak within its borders during the early stages of the disease, parroting a Beijing propaganda claim that there was “no clear evidence of human-to-human transmission.” China’s Wuhan region is the birthplace of the coronavirus.

U.S. officials have also accused Beijing of downplaying the extent of the coronavirus during the deadly and highly contagious disease’s early stages and slowing the world’s response. Beijing and the W.H.O. have denied hiding the accusations.