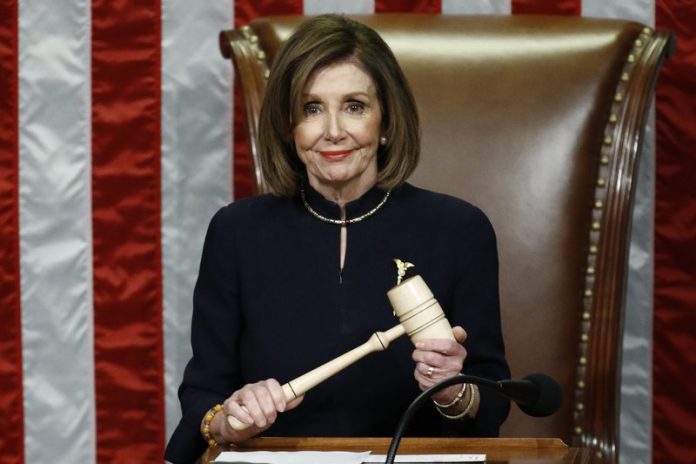 (Breitbart) – Speaker of the House Nancy Pelosi (D-CA) insists that she will not appoint House managers for President Donald Trump’s impeachment trial, nor transmit the articles of impeachment to the Senate, until she is satisfied that Senate Majority Leader Mitch McConnell (R-KY) will provide a “fair trial.”

Her logic completely inverts the concept of a “fair trial,” which applies to the accused and not to the accuser. However, by her actions, she has already made a fair trial impossible.

Democrats repeatedly compared the House inquiry to a grand jury investigation, and impeachment itself to an indictment.

Now, having indicted the president, they want to hold off on a trial, after insisting for weeks that it was urgent to remove him from office, and claiming that principles of justice demanded a “swift” result.

They are not just afraid of losing in the Senate.

They are also holding out hope for more evidence.

On Monday, the Democrats on the House Judiciary Committee told the U.S. Court of Appeals for the D.C. Circuit that they want to compel the testimony of former White House counsel Don McGahn, in the hope of filing additional articles of impeachment related to the “Russia collusion” investigation.

The Department of Justice says the issue is moot, arguing that any decision on McGahn’s testimony would be prejudicial to the president’s trial in the Senate, since Trump has been accused of “obstruction of Congress” merely for resisting subpoenas of senior White House officials like McGahn.

The Judiciary Committee’s case is, arguably, undermined by its own impeachment report, in which it referred to McGahn’s possible testimony as relevant to “these articles of impeachment” (emphasis added). It added that it intended to continue investigating, but not with regard to impeaching Trump.

Now, Pelosi and the Democrats want to change the rules. They want to hold impeachment over the president’s head before they have come to a final decision about what they will be impeaching him for — a Kafka-esque scenario in which the accused must wait for judicial process until guilt is found.

The Sixth Amendment to the Constitution explicitly states: “In all criminal prosecutions, the accused shall enjoy the right to a speedy and public trial.” Impeachment is not a criminal proceeding, but it would be difficult to argue that the president enjoys fewer rights than an ordinary criminal defendant.

That is, unless he is a Republican named Trump.

Democrats have already trampled his rights to due process and his rights to legal representation, departing from the precedents in the Nixon and Clinton impeachment inquiries. Pelosi’s new gambit simply adds to those abuses and mocks the ideal of justice.

A fair trial is impossible under such circumstances. Indeed, Pelosi has no intention of providing a fair trial. She is attempting to exert power that she does not even have, according to the Constitution, to dictate the Senate’s trial procedures.

The only “fair trial” possible now must result in a dismissal.