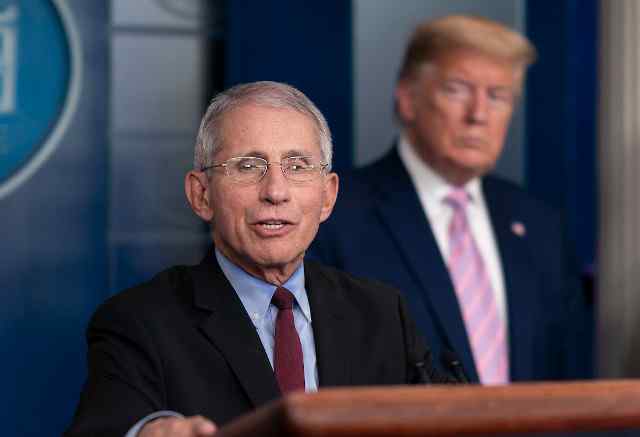 (Infowars) – President Trump is seeing the light on the real Dr. Anthony Fauci after a series of White House briefings with intelligence insiders who were critical of the embattled supposed coronavirus medical guru.

And now the White House has been briefed as well. Paine’s newest podcast detailed the recent turn of events and since it aired this week, Fauci has been largely absent from daily White House briefings. Listen to the podcast here.

Links between Dr. Tony Fauci, China, French company Sanofi Pasteur, George Soros and the Gates Foundation are old and deep. The China coronavirus ties them all together.

In late December 2019, Taiwan sent an email to the World Health Organization (WHO) stating that a unique ‘atypical pneumonia’ was identified in China and asking the WHO to provide any information they might have regarding the pneumonia:

At exactly the same time, and perhaps in response to Taiwan’s notice, Chinese Health officials notified the WHO of the coronavirus outbreak in Wuhan:

Chinese health officials informed the World Health Organization about the new virus on Dec. 31. By Jan. 8, it had been identified as a new coronavirus, a large family that causes the common cold and more serious illnesses including SARS, which also began in China. By Jan. 12, Chinese scientists had sequenced the virus’ genetic makeup and shared it with WHO, drawing praise for their transparency and swift action.

But then for most days between January 5th and 16th, China reported no new cases of the coronavirus leading up to the China New Year, yet there were hundreds of cases being reported in Wuhan and around China at this time:

In contrast, the Wuhan heath commission reported no new cases from Jan. 5 to 10 and again from Jan. 12 to 16. China’s Lunar New Year rush —the world’s largest annual human migration — began to get underway, with millions of people passing through Wuhan, a major transit hub. A recently submitted complaint to the National Health Commission alleged that during this period, officials with the Wuhan health commission told doctors they were not allowed to report about the new virus, letting patients wander around freely instead of being isolated.

China knew their biggest annual celebration, the Chinese New Year, was coming at the end of January, starting on Saturday, January 25th. So the Chinese leaders stepped in and punished any reports on the coronavirus:

Not all the blame can be placed on local officials, health and governance experts say. The broader issue is that local officials can be punished for reporting bad news to higher officials. The Chinese government’s rigidity, and a lack of transparency and accountability to the general public means problems like the virus epidemic can fester hidden away until it is too late.

Chinese leadership and the WHO held a lid on the coronavirus for six key days between January 14th and 20th, right before the Chinese New Year:

In the six days after top Chinese officials secretly determined they likely were facing a pandemic from a new coronavirus, the city of Wuhan at the epicenter of the disease hosted a mass banquet for tens of thousands of people; millions began traveling through for Lunar New Year celebrations. President Xi Jinping warned the public on the seventh day, Jan. 20. But by that time, more than 3,000 people had been infected during almost a week of public silence, according to internal documents obtained by The Associated Press and expert estimates based on retrospective infection data.

On January 15th, China would only report 41 cases publicly. Based on this information, President Trump in Davos claimed that the US had the situation under control, no doubt based on what his health advisors had told him. The media now claims the President missed the significance of the situation but only a week before Trump’s statement in Davos, China had confirmed only 41 cases of the coronavirus. By January 31st, the WHO would label the China coronavirus a public health crisis. By February 2nd, China would report more than 17,000 cases.

In 2006 there was an H5N1 outbreak in Asia and by June, human to human transmission was confirmed but no one in the US was infected at that time. In response, the New York Department of Health concocted a response to this “pandemic.” In a complete 180 from what is being done today, Dr. Anthony Fauci who has served as the director of the National Institute of Allergy and Infectious Diseases (NIAID) since 1984, and New York City Mayor Bloomberg, recommended against a mandatory quarantine.

The FDA has licensed Sanofi Pasteur’s H5N1 vaccine, the first avian flu vaccine for humans. Sanofi Pasteur, in collaboration with the National Institutes of Health, submitted a BLA to the FDA for the vaccine. The licensure is the first step in achieving the government’s goal of stockpiling vaccine to protect those who are at increased risk of exposure to the H5N1 flu virus contained in the vaccine during the early stages of a pandemic.

The White House coronavirus task force had its biggest fight yet on Saturday, pitting economic adviser Peter Navarro against infectious disease expert Anthony Fauci. At issue: How enthusiastically should the White House tout the prospects of an antimalarial drug to fight COVID-19?

Peter Navaro reportedly was very angry with Fauci and supplied folders of studies showing how the anti-malaria drug worked against the coronavirus. Navaro also reminded all in the room that it was Dr. Fauci who argued against President Trump’s travel ban with China in January.

Sanofi Pasteur is related to one of the very first western labs located in the Republic of China. One of it’s investors is George Soros.

Soros also invests in a company in Wuhan, China, where the Coronavirus outbreak began. That company is called Wuxi AppTech, which just so happens, they develop vaccines too. This company is also related to the former Head of the China Communist Party, Jiang Zemin.

The Gates Foundation, the foundation created by American billionaire Bill Gates, hired Sanofi Pasteur to explore the technical and regulatory feasibility of Micropellet technology for the development of cost-effective novel combination vaccines that are thermal stable. The Foundation also worked with Sanofi on a polio vaccine. Then in March 2020 Sanofi announced that the Gates Foundation was working again with them, this time on the coronavirus:

Sanofi is proud to be part of the Bill & Melinda Gates Foundation consortium to accelerate the development, manufacture and delivery of vaccines, diagnostics, and treatments to fight Covid-19.

And as noted above, now Sanofi has also been engaged by the US government to work on a vaccine for the cononavirus.

China at first covered up the coronavirus, but as soon as it admitted what was going on, the virus had spread and economic opportunists around the world jumped in.