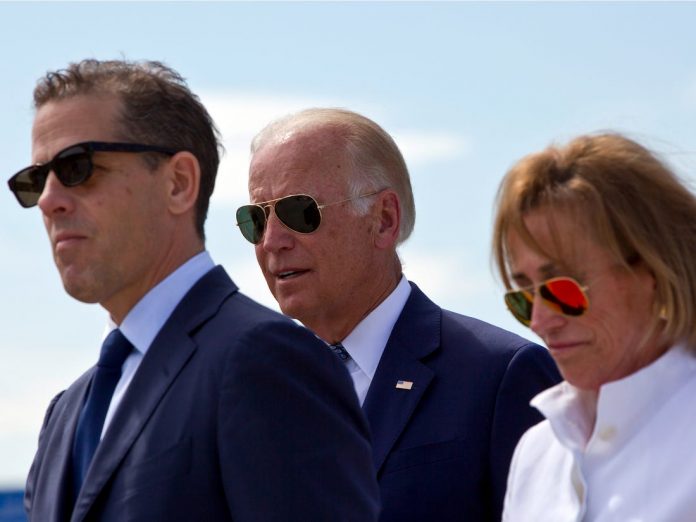 (Breitbart) – Despite former Vice President Joe Biden’s image of being a fighter for the working class, he has actually engaged in behavior that benefitted himself and his family members to the tune of millions of dollars in shady business deals, according to an interview with Government Accountability Institute (GAI) president and Breitbart News senior contributor Peter Schweizer, author of the new book Profiles in Corruption: Abuse of Power by America’s Progressive Elite.

Schweizer, in an interview on Wednesday with SiriusXM’s Breitbart News Daily with host Alex Marlow, said that dichotomy is represented by Biden being known for riding Amtrak home every day but also by his habit of holding up the train whenever he was running late.

“Yeah, Joe does ride the train all the time, but if Joe’s running late, Joe calls Amtrak, and they hold the entire train until Joe shows up, which is great for Joe [but] the other commuters are probably going, ‘What the heck’s going on? Why is the train not moving?’” Schweizer said. “So that to me represents the dichotomy between the image we have of Joe, which is Amtrak Joe, and the reality of how he abuses that power.”

Schweizer discussed several examples of Biden’s abuses of power he laid out in his book.

He said after Biden became vice president and the point person on China, his son Hunter Biden began to benefit from deals with the Chinese government. He said:

You have this situation where Joe Biden becomes vice president of the United States. He is the point person on China, he’s somewhat of an old hand on China because he’s on the Senate Foreign Relations Committee all those years, traveled to China. He becomes vice president and then suddenly, sort of out of the blue, his son Hunter gets these deals courtesy of the Chinese government.

As Schweizer detailed in a previous book, Secret Empires, Hunter Biden in 2012 inked a $1.5 billion deal with a subsidiary of the state-owned Bank of China to create a private equity fund called Bohai Harvest RST — only 12 days after he visited China with his father aboard Air Force Two.

The key on all this stuff you have to look at, I think with corruption, is timing. And you mentioned Ukraine. The timing is clear: February of 2014, Putin moves into Crimea, that creates this whole crisis. In March of 2014, Joe is point person on Ukraine policy. Within three weeks, Ukrainians suddenly decide, “Hey Hunter Biden is the guy, the expert, we want to join this company. And yeah, we need to pay him a million dollars a year.” You look at that and think, “This is absurd” … It’s not like he was advising Ukraine in 2005. Same thing with China. They do the pivot to China in 2011, 2012. Joe goes over there on one of his first significant trips, and what does he do? His son comes with him, and ten days after the trip, the son suddenly announces this billon-and-a-half-dollar private equity deal. It’s clear, it’s crystal clear what’s going on.

Schweizer also discussed how Hunter Biden, while his father was vice president, set up a financial entity known as the Burnham Financial Group, along with business partner Devon Archer and then-Secretary of State John Kerry’s stepson Christopher Heinz, that benefitted from the Bidens’ political clout.

The Burnham Financial Group, when you go through — there was a court trial, so we got access to some of the corporate records — again, you’ve got deals with Kazakh officials, with a guy named [Kenes] Rakishev, who’s this Kazakh oligarch. You’ve got this reference in corporate documents to this $200 million deal that they have with Elena Baturina. Now, Elena Baturina is the ex-wife of the mayor of Moscow, and if you spend five minutes on Google with Elena Baturina, you realize that law enforcement across the western world believes she’s at the center point of Russian organized crime. Well, they’re saying in corporate documents we have a $200 million deal with this individual. This is all going on — doesn’t happen before he is vice president. It’s not really happening since he’s been vice president. It’s happening in this one island of eight years.

Schweizer said the Burnham Financial Group also set up a deal with the nation’s poorest Native American Indian tribe, the Oglala Sioux Tribe of South Dakota: “That’s an attempt to basically rip off these Indian tribes, and by the way, let’s rip off some labor union pension funds as well.”

Schweizer said although Archer is more involved then Biden in the scheme, the Bidens’ names “came up all the time” when meeting with pension fund officials. Joe Biden was known as a being “the big labor union guy,” Schweizer said.

He said in June 2011, Biden brought founders of a start-up health care investment firm called StartUp Health into the White House to meet with President Obama, and they took a picture they later used for their website. The start-up was featured the next day at a federal data conference on health care despite it being a new company, Schweizer said.

Schweizer said over the next five years, through 2016, the vice president showed up at the company’s conferences and closed-door events for investors and partners. He said:

Well, the factor that I haven’t mentioned is that one of the three principals involved with this company is married to his daughter and I think explains what’s going on here. So how you do all of that and hold true to your statement that you’ve never had a conversation with a family member about business matters is patently absurd.

Schweizer said in 2000, Frank Biden rented a Jaguar, which he let another man drive with three girls in the back. He continued:

The guy that’s driving it is going 70 in a 35. They hit this man who’s a single father who has two teenage daughters … He hits the car, goes over the top of the car, and of course dies. The three girls in the back of the car say that Frank — once this happened — told the guy driving, “Keep driving, keep driving.” So the estate for the girls that have survived … sues Frank Biden. The driver, of course, is sent to jail for reckless driving. They go after Frank with a civil suit. Frank doesn’t show up to court, doesn’t really respond to the allegations, so the court says, you know, “you’re liable for $250,000.” The court’s now trying to collect this debt.

Schweizer said the daughters’ family hired a private investigator to find Frank Biden. He said after he is found living in Delaware with Joe Biden, the daughters wrote Joe Biden, telling him what happened and that his brother was liable.

Schweizer said the letter Joe Biden wrote back to them “is so cold and so calculating, particularly, by the way, for a man — Joe Biden — who lost his wife and his daughter in a car accident as well.” Schweizer said:

He says basically, “Well, you know Frank doesn’t have the money. I’m certainly not liable, and I just wish you well.” That’s basically what he says in this letter. And so that sort of sets up the entirety, in my mind, for a lot of what Frank is doing, which is Frank is doing overseas deals in places like Costa Rica and Jamaica because … that’s beyond the reach of the court. That debt has now ballooned to like nine hundred thousand dollars.

Schweizer said in the meantime, Frank Biden set up a company to make money off of tax-funded charter schools with questionable characters.

Some of the people [that] finance these deals, are the most sketchy of characters. There’s a guy that has a criminal record, a violent criminal record from the past, was widely believed in southern Florida for being involved in the drug trade. His brother actually was found in a shallow grave because of a major drug deal gone bad, and yet Frank Biden did major financial real estate transactions and deals with these guys and helped them make money through this charter school grift.

Marlow concluded: “The main takeaway I took from Biden is that Joe Biden is either too weak to stand up to his family or he is in on it, and both are terrible, especially if he’s running for president. It’s one or the other.”

Video: Peter Schweizer Unveils the Layers of Corruption Behind the Biden Family