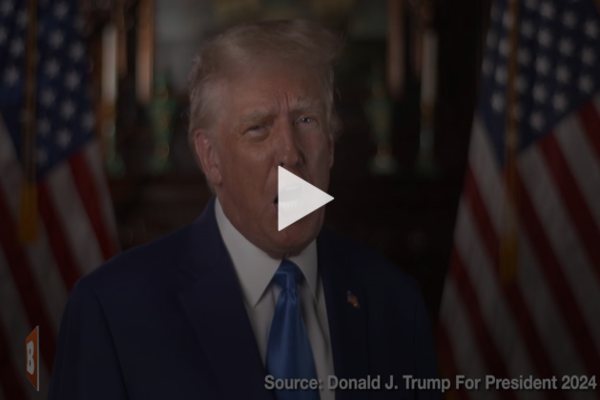 (breitbart) – Former President Donald Trump exclusively shared with Breitbart News his latest campaign video, in which he blasts Democrats for releasing his personal tax returns and calls on the incoming Republican-led House of Representatives to obtain and release President Joe Biden’s financial records.

On Tuesday, the Democrat-led House Means and Ways Committee voted along party lines to release Trump’s tax returns. Within hours, it published data from Trump’s 2015-2020 returns. The Committee obtained the documents through an appeals court ruling that ordered Trump to turn them over following a years-long legal battle. The 45th president had filed a request with the Supreme Court to block the ruling, but it was denied last month.

Trump, the lone Republican candidate thus far in the 2024 GOP primary field, blasted the “radical Democrats” on Friday for the move, asserting that it is “an outrageous abuse of power” and that the documents only show how successful he has been.

“There is no legitimate legislative purpose for their action, and if you look at what they’ve done, it’s so sad for our country,” he said after calling the situation “unconstitutional.” “It’s nothing but another deranged political witch-hunt, which has been going on from the day I came down the escalator in Trump Tower.”

“Although these tax returns contain relatively little information and not information that almost anybody would understand — they’re extremely complex — the radical Democrats’ behavior is a shame upon the U.S. Congress,” Trump added before calling on Republicans in the next Congress to pursue Biden’s financial records:

Plans are already in the works to obtain some of Biden’s financial records. Last month, Rep. Jamie Comer (R-KY), who is set to chair the House Oversight Committee in the new Congress, announced that he intends to open an investigation into Biden on a number of potential violations, including “wire fraud, conspiracy to commit wire fraud, violation of the Foreign Agents Registration Act, violations of the Foreign Corrupt Practices Act, violations of the Trafficking Victims Protection Act, tax evasion, money laundering, and conspiracy to commit money laundering.”

Days later, he told Sirius XM’s Breitbart News Saturday that the bank records of Biden’s son Hunter and James Biden, the president’s brother, would be the first focus of the probe. He also asserted that the pair had at least 150 suspicious activity reports between them. Of note, Biden published his joint tax returns with first lady Jill Biden in 2020 and 2021.

Earlier in the video, Trump contrasted his work as a real estate mogul and entrepreneur, who has “employed thousands and thousands of people” over the years, to career politicians in Washington, DC, who “only know how to kill jobs.”

“While others use public office to enrich themselves, I left an amazing life behind to go and fight for the American people, and I’m glad I did it,” he said. “It hasn’t been easy, but I’m glad I did it.”

In 2018 and 2020, Breitbart Senior Contributor and Government Accountability Institute President Peter Schweizer published Secret Empires and Profiles in Corruption. Each book hit #1 on the New York Times bestseller list and exposed how Hunter Biden and Joe Biden flew aboard Air Force Two in 2013 to China before Hunter’s firm inked a $1.5 billion deal with a subsidiary of the Chinese government’s Bank of China less than two weeks after the trip. Schweizer’s work also uncovered the Biden family’s other vast and lucrative foreign deals and cronyism.

Breitbart Political Editor Emma-Jo Morris’s investigative work at the New York Post on the Hunter Biden “laptop from hell” also captured international headlines when she, along with Miranda Devine, revealed that Joe Biden was intimately involved in Hunter’s businesses, appearing even to have a ten percent stake in a company the scion formed with officials at the highest levels of the Chinese Communist Party.