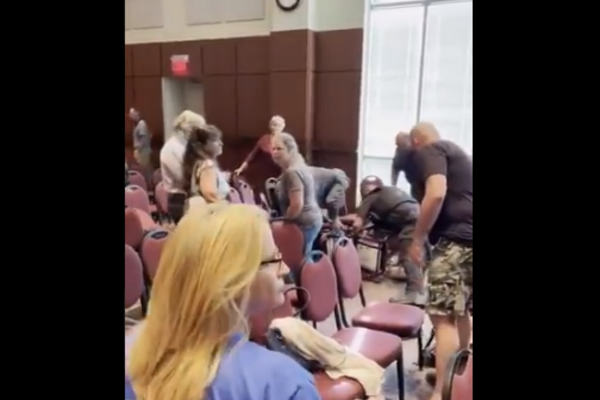 (breitbart) – A father is claiming the Loudoun County school district attempted to cover up his daughter’s alleged assault in the girls’ bathroom at Stone Bridge High School by a boy wearing a skirt.

Scott Smith was arrested in June at a school in Loudoun County, Virginia, during a board meeting at which hundreds of parents voiced concerns about the district’s transgender policy and Critical Race Theory (CRT).

A month earlier, the Daily Wire reported, Smith claimed a boy who was wearing a skirt had entered the girls’ bathroom at the high school and sexually assaulted his ninth-grade daughter.

Smith said the school told him they would handle the incident of his daughter’s alleged assault in-house.

The father’s arrest came during a board meeting at which the board ordered the room cleared as attendees grew more upset with comments that were made.

A sheriff’s deputy ultimately declared the meeting an “unlawful assembly” and ordered the crowd to disperse or be subject to arrest for “trespassing,” as Breitbart News reported.

Just prior to Smith’s arrest at the meeting, the Loudoun County Public Schools superintendent told attendees opposed to the transgender bathroom policy their concerns were unfounded since the school district had no record of any assaults in school bathrooms, the Daily Wire reported.

An LGBTQ activist at the meeting reportedly told Smith his daughter’s claim of assault was not believable because there were no records of such assaults.

Smith said, with that statement, he “went nuts” and insulted the principal, and was subsequently arrested.

“If someone would have sat and listened for thirty seconds to what Scott had to say, they would have been mortified and heartbroken,” Lancaster said.