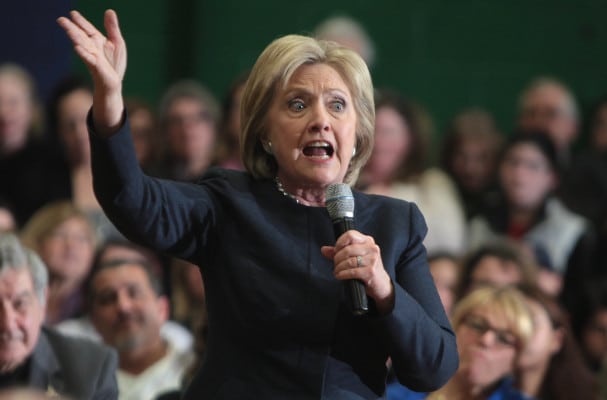 Conservative watchdog group Judicial Watch announced Friday it obtained 80 pages of new emails recently found by the FBI documenting how Hillary Clinton transmitted classified material over a private server while she was the head of the Department of State.

The State Department previously claimed it had already turned over all of Clinton’s emails including emails recovered by the FBI that she tried to destroy with BleachBit.

As usual, the “Deep State Department” was lying.

The new emails include an October 13, 2012, message from Clinton telling private attorney Robert Barnett about a conversation with Jake Sullivan, Clinton’s senior advisor and deputy chief of staff, about Benghazi: “Jake and I were discussing the Benghazi security issue since he tried to tell [Redacted] would be asked about it but they didn’t think so. Might be good for you to call Jake too.” Clinton also mentions then-candidate Mitt Romney’s “47% remark,” referring to his dismissal of Obama voters as irresponsible.

On August 29, 2011, Sullivan sends a “cheat sheet” with “key issues” to Clinton, Abedin and Clinton’s confidential assistant Monica Hanley including “Talking Points for POTUS” for a briefing that day. The talking points are completely redacted. The new email cache includes an email dated August 31, 2011, that former Assistant Secretary of State for Near Eastern Affairs Jeffrey Feltman sends to former Deputy Chief of Staff Huma Abedin, William Burns and others, which is heavily redacted as classified. Burns forwards the email to Sullivan. Sullivan forwards it to Clinton’s private email, and she responds: “I called him [redacted.] Didn’t you get memcon?” On December 22, 2009, former Ambassador Joseph Wilson emails Clinton “directly … rather than Sid [likely Sidney Blumenthal]” about Afghanistan, disparaging “cost plus contractors” and promoting his company, Symbion Power. Wilson includes a memo from his boss, an Inspector General audit of USAID in Afghanistan’s power sector activities and a memo of USAID management’s comments regarding the audit. Clinton forwards the email to Deputy Secretary of State for Management and Resources Jacob Lew, Mills and Sullivan with the following instructions: Please check out what Joe is saying here. He is now working for a company that has a good track record building in Iraq and wants to do so in Afghanistan. Let me know. Thx. On November 1, 2012, Valmoro sends Clinton, Abedin and Hanley a copy of Clinton’s sensitive schedule that includes a briefing with President Obama and afterward a meeting with then-Special Envoy for Middle East Peace David Hale, Burns and Sullivan.

“Magically, after years, the FBI finds more Clinton emails that are classified, involve Benghazi, and detail communications with President Obama,” said Judicial Watch President Tom Fitton. “This drip, drip game that the DOJ, FBI, and State are playing is a key reason a federal court authorized more discovery, including the sworn deposition of Hillary Clinton.”