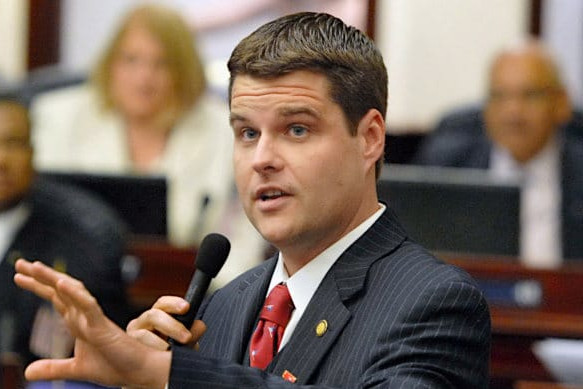 A partial transcript is as follows:

LAURA INGRAHAM: Congressman Gaetz, you actually want to take a pretty aggressive step here. What is it? REP. MATT GAETZ: Tomorrow, Laura, I will be filing charges against Nancy Pelosi in the House Ethics Committee. She disgraced the House of Representatives, she embarrassed our country, and she destroyed official records. The law does not allow the Speaker of the House to destroy the records of the House. The rules of the House do not permit some little temper tantrum because you don’t like what the President of the United States says. You know what? A lot of Republicans are sick of the double standard here. When Joe Wilson made a comment and excited utterance, oh, the Democrats really brought the heat down on him — when he said that Obama lied about illegals getting healthcare under Obamacare. By the way, Joe Wilson was right. We’ve got to apply the same standards to the Democrats that they want to apply to us, and there will be an ethics investigation into Nancy Pelosi. We will start the ball rolling to have her censured. The first act begins tomorrow when Congressman Zeldin and I will join Kay Granger in a censure resolution, and we will force a vote on that resolution.

George Washington Law Professor Jonathan Turley wrote Wednesday that House Speaker Nancy Pelosi (D-CA) should resign after slighting President Donald Trump while introducing him at the State of the Union and for ripping up his prepared remarks.

Turley wrote for The Hill:

First, Pelosi dropped the traditional greeting before the start of the address, “Members of Congress, I have the high privilege and distinct honor of presenting to you the president of the United States.” Instead, she simply announced, “Members of Congress, the president of the United States.” It was extremely petty and profoundly inappropriate. Putting aside the fact that this is not her tradition, but that of the House, it is no excuse to note that the president was impeached. … Such an indignity was not imposed on President Clinton during his own impeachment proceeding, and anyone respecting due process would note that Trump has been accused, not convicted, at this point in the constitutional process. Pelosi proceeded to repeatedly shake her head, mouth words to others, and visibly disagree with the address. It was like some distempered distracting performance art behind the president. … Pelosi has demolished decades of tradition with this poorly considered moment. Of course, many will celebrate her conduct and be thrilled by the insult to Trump. However, even those of us who disagree with his policies should consider what Pelosi destroyed in her moment of rage. She shredded the pretense of governing with civility and dignity in the House. Notably, she did not wait to rip up her copy of the speech until after she left the House floor. Pelosi wanted to do it in front of the cameras, at the end of the address with the president still in the chamber. … Pelosi, like her predecessors, is supposed to remain stone-faced during the address even if the president leaves her personally enraged. Indeed, House Speakers have been the authority who kept other members in silent deference and respect, if not to the president, then to the office. However, Pelosi appeared to goad the mob, like a high schooler making mad little faces behind the school principal at an assembly. It worked, as members protested and interrupted Trump. Pelosi became another Democratic leader, little more than a twitching embodiment of this age of rage. That act was more important to Pelosi than preserving the tradition of her office. In doing so, she forfeited the right to occupy that office. If Pelosi cannot maintain the dignity and neutrality of her office at the State of the Union, she should resign as the speaker of the House of Representatives.