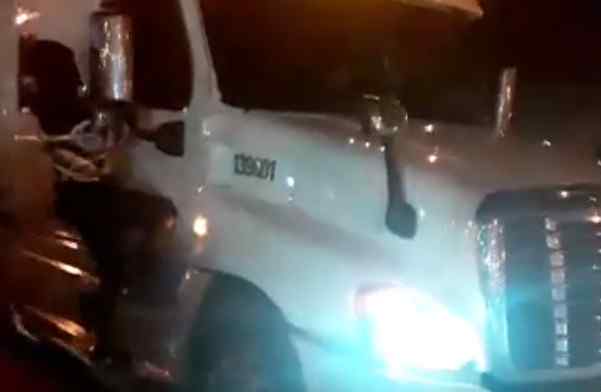 (Gateway Pundit) – On Thursday night far left protesters attempted to loot a moving UPS truck during their violent protests and rioting in Minneapolis.

The entire hoist was captured on video.

On Friday night far left protesters in downtown St. Louis shut down Highway 70 heading into St. Louis City and then rushed on the highway to frighten drivers.

One semi truck driver attempted an escape from the violent mob and ended up dragging a protester who was caught between his two trailers. The FedEx driver could not see him.

The far left protester was dragged down the highway. He was later confirmed dead.

The mob was banging on his truck.

You can see the protester was stuck between the trailers.

The more the mob banged on his truck the more the driver was determined to get away.

Detectives are investigating after a man was killed after being dragged by a FedEx truck overnight in downtown St. Louis following a night of protests. The accident happened near N. Broadway and O’Fallon around 3:08 a.m. The man was taken to a hospital where he later died, police said. An accident reconstruction team was called to the scene to investigate. Bystander Jared Arms captured video of the incident. Protesters had blocked off the street with their cars and were seen setting something in the road on fire when the FedEx truck approached. The video captured protesters banging and climbing onto the FedEx truck. A man, who was seen standing between the truck’s two trailers, was dragged by the semi truck just moments later.