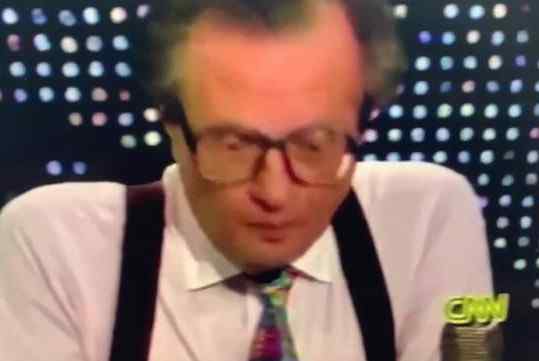 (Gateway Pundit) – Shocking new evidence has emerged that backs up Tara Reade’s claim about being sexually assaulted by then-Senator Joe Biden in 1993 — and ironically, it originally aired on CNN.

Reade told reporters that at the time of the harassment and assault by Biden she told various people including her mother, a close friend, and her brother.

Reade has alleged that when she was a staffer for Biden in her 20s, he forced her up against a wall, forcibly kissed her, put a hand up her blouse and skirt, and penetrated her with his fingers. Biden has denied the allegations.

Speaking to The Intercept, Reade explained that her mother even called in to “Larry King Live” on CNN and discussed her daughter’s experience on Capitol Hill.

That video has now surfaced.

“On August 11, 1993, King aired a program titled, ‘Washington: The Cruelest City on Earth?’ Toward the end of the program, he introduces a caller dialing in from San Luis Obispo, California. Congressional records list August 1993 as Reade’s last month of employment with Biden’s Senate office, and, according to property records, Reade’s mother, Jeanette Altimus, was living in San Luis Obispo County,” the Intercept reports.

During the call, her mother asked King for advice on what her daughter should do, though she did not discuss Biden by name. Reade’s mother has since passed away.

The clip from the Larry King episode was playing last week online but Google has since removed the episode from its Google play catalog.

The 1993 episode of CNN’s “Larry King Live” featuring an anonymous caller who was later identified as the mother of Biden accuser Tara Reade was no longer listed in Google Play’s catalog late Saturday. Twitter user J.L. Hamilton shared a screenshot showing the Aug. 11, 1993, broadcast of “Larry King Live” was no longer listed in the season three catalog of the iconic CNN talk show. Mysteriously, though, the Aug. 10 broadcast, which is listed as “Episode 154” is followed by the Aug. 12 broadcast, which is listed as “Episode 155,” suggesting that episode and the ones that follow could be incorrectly listed and off by a number. Fox News later verified the Aug. 11 episode is not listed on the streaming service. It is unclear when it was removed from the catalog. Neither CNN nor Google immediately responded to Fox News’ requests for comment. Fox News also reached out to the representation of Larry King and have not heard a response. https://twitter.com/absinthol/status/1254242795017117696

It’s only April and Google is already electioneering for Democrats.

Will there ever be a brave politician to take on these corrupt tech giants?