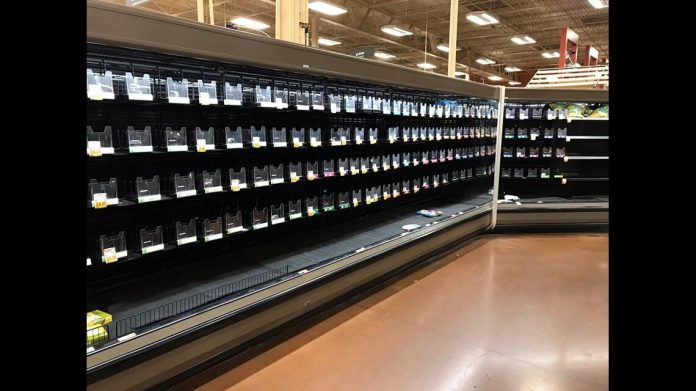 (Gateway Pundit) – Kentucky Rep. Thomas Massie is warning that the United States could be just weeks away from major food shortages due to the coronavirus shutdown.

He warned that livestock could end up being euthanized and fruits and vegetables will be left to rot in the fields if a drastic change isn’t made.

“We are weeks, not months, away from farmers euthanizing animals that would have been sold for meat/food. Also, fruits and vegetables are going to rot in the fields. A drastic change in policy this week could ameliorate this inevitability,” Massie tweeted Monday, along with a link to a radio show he appeared on to discuss the issue.

During the interview, Massie raised concerns about the fact that while there is livestock, farms have no where to send them because meat processing plants have shut down because of the virus.

“You have people running the government that have no clue about how the economy works and how their food gets to the table,” Massie said.

“The shocking thing is that farmers are watching the value of their hogs and steers, cows, go down. In fact, they’re going to some of the lowest levels ever,” he added. “So the question is: Why is the price of meat going up in the supermarkets and the price of cattle going down at the auction ring? It’s because our supply line is brittle. You have to take cattle, steer, beef, whatever, hogs, to a processing plant. And these processing plants, like much of industrial America right now, are shutting down because of absentees, which has been exacerbated by the unemployment program the federal government has instituted — plus the $1,200 checks that are about to hit, plus some of the regulations that the states have put in place.”

Massie explained that six of the largest processing plants are shut down.

“I’m afraid you’re going to see … cattle and hogs being euthanized or incinerated and buried while we have shortages at the supermarket. And you talk about civil unrest when you start seeing that. And it’s all because of the brittle food supply chain,” he said.

The Kentucky representative said that he has also introduced a bill to help prevent a shortage.

“I’ve got a bill that would let these local meat packers sell cuts of meat individually instead of having to sell half a cow or a quarter of a cow,” he said.