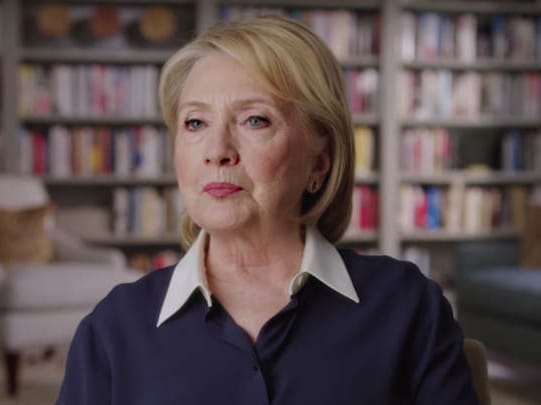 (Gateway Pundit) – According to The Daily Mail, former 2016 Democrat presidential candidate Hillary Clinton refuses to accept blame for literally every mistake and misstep that she has made during her 40+ years in American politics.

Hillary Clinton claims she is the ‘the most investigated innocent person in America’ in a new Hulu documentary about her life.

Set to premiere in full this Friday on the steaming network Hulu, the Clinton inner-circle claims that she has a “superpower” and don’t dare question Hillary’s belief that the world has been working against her since day one. Clinton even claims that the media was working against her in 2016 and that she still doesn’t understand the big deal about her handling of the attack on the American consulate in Benghazi or her illegal use of a private email server during her time as Secretary of State.

And if you are ready for a real dose of BS, Lady Clinton defends the fact that both she and her husband made over $150 million in paid speeches from organizations, businesses and groups that had business with or ties to the United States government while she had immense power over said groups as Secretary of State.

The former Secretary of State called the Benghazi scandal a ‘character assault’ and dismissed criticism of her Wall Street speeches which have earned her and her husband Bill Clinton and estimated $153 million.

In the one instance of honesty, she does admit that maybe God just doesn’t like her and that something about her “just pisses him off.”

‘And I don’t know why. There’s an old joke about an old guy who is walking along the edge of the cliff, he slips and as he’s falling down and he grabs onto a branch and he’s holding on and he’s praying, going “God, God I’ve lived a good life, I’ve done everything I supposed to do…please Lord help me, help me.”’

‘And then this voice comes out and says “There’s just something about you that pisses me off”’.

Yes, Mrs. Clinton, for once you are right. And that “something” is the decades long criminal enterprise known as the Clinton Crime Cartel, your shaming and attacks on your husband’s rape victims, and your wanton disregard for the rule of law. The list is long but thankfully the American people saw right through you on election day in 2016.