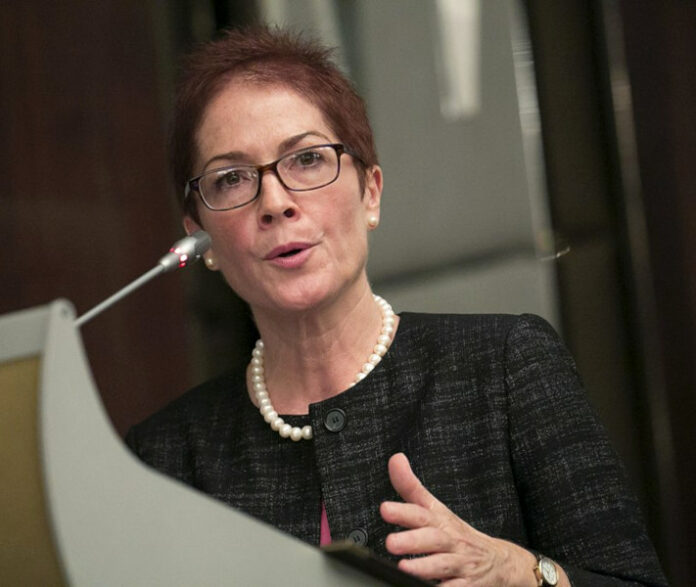 (Gateway Pundit) – House Democrats this week called in fired US Ambassador Marie Yovanovitch to testify in their sham impeachment proceedings.

Ambassador Yovanovich is a noted Trump-hater who blocked Ukrainian officials from traveling to the United States to hand over evidence of Obama misconduct during the 2016 election to President Trump.

Yovanovich was US ambassador to Ukraine during the 2016 election when the Ukrainian government was colluding with the DNC and Hillary Campaign to undermine the US presidential election.

Ukrainian Prosecutor General Yuriy Lutsenkoko told journalists in March that Yovanovitch gave him a do not prosecute list during their first meeting.

The president ordered her removal from her post in Ukraine.

She was openly anti-Trump.

This video from The Ingraham Angle is from March.

She was US ambassador to Ukraine during the 2016 election when the Ukrainian government was colluding with the DNC and Hillary Campaign to undermine the US presidential election.

US Ambassador Yovanovich, an Obama appointee, was removed from her post in Ukraine early in May 2019.

John Solomon at The Hill reported:

According to interviews with more than a dozen Ukrainian and U.S. officials, Ukraine’s government under recently departed President Petro Poroshenko and, now, Zelensky has been trying since summer 2018 to hand over evidence about the conduct of Americans they believe might be involved in violations of U.S. law during the Obama years.

The Ukrainians say their efforts to get their allegations to U.S. authorities were thwarted first by the U.S. embassy in Kiev, which failed to issue timely visas allowing them to visit America.

The Ukrainian officials were denied their visas to enter the US in 2018.

Corrupt Ambassador Yovanovich was fired by the Trump administration in May 2019 when all of the Ukrainian collusion with the DNC came to light.

It is telling that far left Democrat lawmakers Steny Hoyer and Eliot Engels were most upset with Ambassador Yovanovitch’s removal.

Now, those lawmakers are bringing their concerns into the public. “The White House’s outrageous decision to recall her is a political hit job and the latest in this Administration’s campaign against career State Department personnel,” said Democratic Reps. Steny Hoyer, House majority leader, and Eliot Engel, the chairman of the House Foreign Affairs Committee, in a joint statement made public Tuesday. “It’s clear that this decision was politically motivated, as allies of President Trump had joined foreign actors in lobbying for the Ambassador’s dismissal.”

This week Democrats called in this corrupt hack to testify against President Trump.