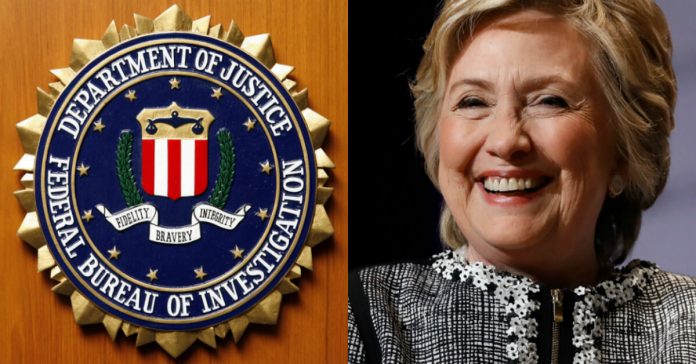 (Gateway Pundit) – The Washington Post reported over the weekend that a former FBI attorney altered information that supported a FISA warrant that was used to spy on candidate and President Trump. Now Deep State actors are trying to minimize the actions of the the Mueller gang lovers who attempted a coup on President Trump’s Administration.

The WaPo reported this weekend and it was quickly uncovered that former Mueller gang members Kevin Clinesmith and his reported lover, Sally Moyer, were involved in altering documents used to obtain a FISA warrant to legitimize spying on candidate and President Trump. The WaPo claims that this will be coming out in the upcoming IG report in December.

There is nothing about the actions by these Deep State players that should be minimized. Here are four reasons the actions of these Mueller gang members who also worked on the Hillary email investigation were very corrupt.

1. These players were extremely biased.

The individual that is noted in the IG’s report is suspected to be Kevin Clinesmith, the FBI attorney who was the lead attorney on the Trump-Russia investigation and who vowed to join the “resistance” after Trump won. He previously worked for Democratic Gov. Jennifer Granholm, who Hillary named to co-chair her presidential transition team.

According to the Daily Caller in June of 2018, an FBI attorney (who now is believed to be Clinesmith) was identified by the IG in a previous report –

One career FBI special agent involved in the case complained to New York colleagues that officials in Washington tried to “bury” the new trove of evidence, which he believed contained the full archive of Clinton’s emails — including long-sought missing messages from her first months at the State Department.

3. These players pared 694,000 Clinton emails down to just 3,077, lying to the whole world that it was some super-duper new system that allowed them to do this which turned out to be completely false.

Sally Moyer — a registered Democrat, the lead FBI attorney on the Midyear team who had initially discounted the trove of new emails as “duplicates” and failed to act upon their discovery, who drafted an unusually narrow scope for the search warrant, and was also head of the email “filtering” team — after various searches of the laptop, she and the Midyear [Hillary Clinton Email Investigation] team came up with 6,827 emails they classified as being tied directly to Clinton. Moyer then culled away from that batch emails she deemed to be personal in nature and outside the scope of legal agreements, cutting the stack in half. That left 3,077 which she deemed “work related” out of 694,000 emails.

On November 5, 2016, Moyer, Strzok and a third investigator divided up the remaining pool of 3,077 emails — roughly 1,000 emails each — and rifled through them for classified information and incriminating evidence in less than 12 hours, even though the identification of classified material is a complicated and prolonged process that requires soliciting input from the original classification authorities within the intelligence community.

4. Sally Moyer defined the scope of the warrant to examine Hillary Clinton’s emails so narrowly as to ensure these emails would never see the light of day.

The search warrant crafted by Sally Moyer on the Abedin/Weiner laptop was too narrow: “The FBI only reviewed emails to or from Clinton during the period in which she was Secretary of State, and not emails from Abedin or other parties or emails outside that period,” Horowitz pointed out in a section of his report discussing concerns that the search warrant request was “too narrow”.

Also excluded from the search warrant were Abedin’s Yahoo emails, even though investigators had previously found classified information on her Yahoo account and would arguably have probable cause to look at those emails as well.

Also removed from the search warrant were the BlackBerry data — even though the FBI had previously described them as the “golden emails,” because they covered the dark period early in Clinton’s term.

“Noticeably absent from the search warrant application prepared by the Midyear team is both any mention that the NYO agent had seen Clinton’s emails on the laptop and any mention of the potential presence of BlackBerry emails from early in Clinton’s tenure,” Horowitz noted.

Even though the BlackBerry messages were “critical to [the] assessment of the potential significance of the emails on the Weiner laptop, the information was not included in the search warrant application,” he stressed, adding that the search warrant application appeared to misrepresent the information provided by the New York field agent. It also grossly underestimated the extent of the material. The affidavit warrant mentioned “thousands of emails,” while the New York agent had told them that the laptop contained “hundreds of thousands” of relevant emails.

After all this, these two corrupt Deep State players were selected to partake in the most corrupt investigation in US history, the Mueller Special Counsel investigation.

There is nothing remotely immaterial about the corrupt actions taken by FBI lovers Kevin Clinesmith and Sally Moyer. Let’s hope these two are just the beginning of indictments of the criminal players in Obama’s FBI and DOJ, and let’s continue to pray for justice.