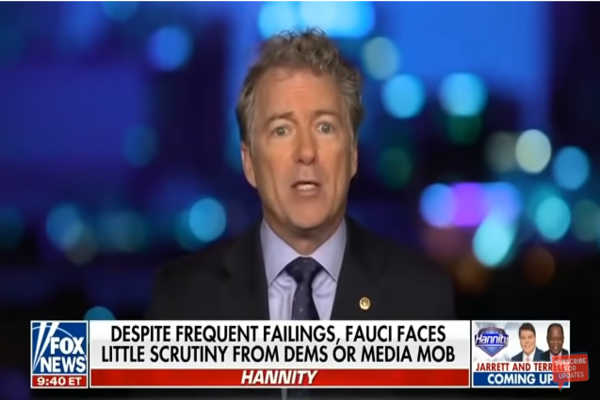 (trendingpolitics) – Will Americans get to have Rand Paul, one of the few men willing to stand up to the globalist uniparty, in the Senate again?

Yes! Kentucky voters rejected the globalists, rejected the RINOs, and stuck with Rand Paul in the GOP primary, meaning that he’ll be the Senator for ruby red Kentucky.

Senator Paul, in the primary, defeated Republicans Arnold Blankenship, Val Fredrick, Paul Hamilton, Tami Steinfield, and John Schiess by a massive margin, bringing in a whopping ~86% of the vote while his opponents hovered in the 3-4% range. It was a massive primary victory for the senator.

Meanwhile, on the Democratic side, a diversity hire won, so Paul should be able to mop the floor with him in November. Both wins were trotted out on Twitter, with his oppponent’s diversity credentials coming up almost immediately:

OK the AP just called the GOP primary for Sen. Rand Paul. His reelection campaign will roll on to November, as expected. #KYSen

The AP just called the Democratic primary for Sen. Rand Paul’s seat for Charles Booker, the frontrunner in that race. He makes history as the first Black person the Democratic Party has nominated for a statewide office in Kentucky. #KYSen

Good for him for winning, but people don’t bring up diversity credentials unless that’s the one thing that someone has going for them. Given that it’s the one credential of his that was trotted out, it sure looks like Booker is a diversity pick that’ll do about as well as diversity hires (such as the new White House press secretary) typically do.

Speaking on his monumental win and what he plans to do with power, Senator Paul released an excellent statment, saying:

“Kentucky, I want to thank you for voting for me to be your Republican nominee for U.S. Senate. I’m honored to serve and honored to have your vote. One more election will happen this fall, and I hope I can count on your vote again.

“As I do most weeks, I’m here in DC battling the socialists and petty tyrants. Kentucky and all of America deserve better than the massive spending, runaway debt and crippling inflation that Biden, Pelosi and Schumer are giving us. I’m working every day to fight back, and I hope you’ll continue to support me and vote them out this fall.”

Senator Paul has made himself known to be an inveterate enemy of the globalists, as seen by his recent stance against the aid package, the bio-medical tyranny state, as seen by his constant spats with Dr. Fauci, and most of all with socialism in all its evil forms, as shown by his writings and even the above, short statement.

Kentucky is lucky to have a Senator as bold and fierce as Senator Paul; luckily for his state it looks like he’ll keep being able to fight on their behalf after November comes and his victory comes with it. Plus, with such a victory as he won, it looks like Paul’s style of politics is highly popular.