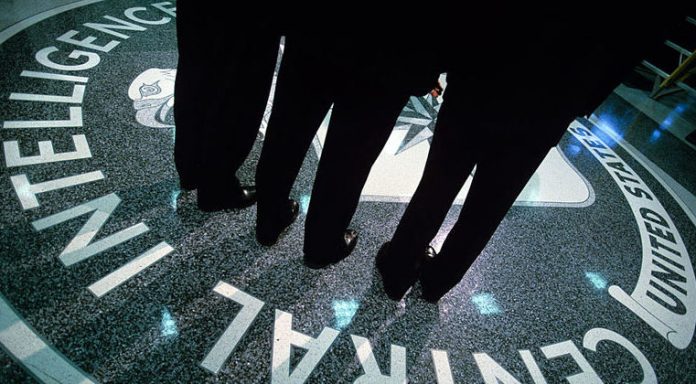 (Gateway Pundit) – Whoa! This is earth shattering. No wonder Lying Adam Schiff and his Democrat cohorts don’t want their suspected whistleblower Eric Ciaramella outed to the public. This is because they all know that Ciaramella was in President Trump’s White House and his purpose was specifically to spy on the Trump Administration.

Dan Bongino put this all together yesterday in his great podcast –

(At about the 10 minute mark Bongino unveils this entire twisted plot.)

In April of this year, Senators Grassley and Johnson sent a letter to Attorney General Barr asking him for any information on the following (or perhaps this was their way of encouraging him to look into something). What they specifically asked about was related to some text messages from corrupt FBI Agents Peter Strzok and Lisa Page referring to a “CI guy” in the White House –

Next Grassley and Johnson provide the exact text messages they wanted Barr to look into. The text from Peter Strzok says “Do we want Joe to go with Evania instead of Charlie for a variety of reasons?” –

A footnote at the bottom of the Grassley and Johnson memo says “At this time it is unknown who “Charlie” is”.

The nature of these communications , and the precise purpose of any attempts to “develop relationships” with Trump or Pence transition team staff are not immediately clear. Were these efforts done to gain better communication between the respective parties, or were the briefings used as intelligence gathering operation? Further, did any such surveillance activities continue beyond the inauguration, and in the event they did, were those activities subject to proper predication? Any improper FBI surveillance activities that were conducted before or after the 2016 election must be brought to light and properly addressed.”

Strzok and Page in their texts were likely referring to fired FBI Director Andy McCabe and Bill Priestap per footnotes on that page. The reference to the “CI guy” is unclear.

Finally Grassley and Johnson discuss the leaks coming from the FBI and the Mueller gang and how Barr should look into those as well.

Who was ‘Charlie’ in the Trump White House and is he the CI guy referred to in other Strzok and Page texts? This leads us back to Bongino who tied the Grassley and Johnson letter together with some more recent information.

On Wednesday Paul Sperry announced at RealClearInvestigations.com in a post that the so-called ‘whistleblower’ in Lying Adam Schiff’s fake impeachment sham is none other than Eric Ciaramella. This is old news to us at TGP as well as Bongino and others on the web. (We first reported on Ciaramella on October 11th.)

But in Sperry’s post, he notes the exact pronunciation for Ciaramella’s name – (pronounced char-a-MEL-ah) –

Bongino suspects that Sperry is trying to hint at something as the pronunciation of a name is not usually included in posts like Sperry’s. What Bongino suggests is that there is a connection between Sperry’s article and the Grassley and Johnson letter – Char-a-MEL-ah is the same ‘Charlie’ in the Strzok and Page communications.

Now this all makes sense. This is why Schiff wanted to keep his identity hidden. Not only because Ciaramella is a clearly a leaker and is culpable for crimes due to his leaking but because he was spying on President Trump in the White House.

As we reported on October 11th, in a hit piece on conservatives in July, 2017, Yahoo reported that Mike Cernovich targeted an individual who worked for former National Security Advisor H. R. McMaster, claiming the individual wanted to ‘sabotage’ President Trump and also claiming he is ‘pro-Ukraine and anti-Russia’.

Cernovich reported in June, 2017, that McMaster promoted Ciaramella in spite of being connected to Susan Rice in Obama’s White House –

West Wing officials confirmed to Cernovich Media that Eric Ciaramella, who worked closely with Susan Rice while at NSC, was recently promoted to be H.R. McMaster’s personal aide. Ciaramella will have unfettered access to McMaster’s conversations with foreign leaders.

(Ciaramella’s old boss, McMaster, was in the news recently by siding with the whistleblower.)

Politico shared this about Ciaramella, in a hit piece claiming Trump supporters in the White House claimed people like Ciaramella were ‘deep state’ – it looks like they were right –

Trump political appointees were believed to frequently talk to journalists who worked for conservative media outlets. For months, those outlets published names of career Civil and Foreign Service officers in the NSC and other government agencies whose loyalties they deemed suspect. Career staffers who had joined the U.S. government many years, sometimes decades, earlier were suddenly cast as Obama loyalists determined to derail Trump’s agenda as part of a “deep state.” The people targeted included a State Department civil servant of Iranian descent who’d joined government under the George W. Bush administration; a highly respected Foreign Service officer who dealt with Israeli issues; and an NSC staffer who dealt with European and Russian issues. The latter, Eric Ciaramella, reportedly left the NSC after receiving death threats. Another staffer targeted by conservative outlets was Fernando Cutz, a Latin America expert and top aide to McMaster; at one point he had to temporarily get police protection. (Cutz was maligned by conservative websites in part because he earned a master’s degree from the University of Arkansas’ Clinton School of Public Service, thus supposedly linking him to another Democratic president.)

According to Politico Ciaramello quit the NSC in the past couple of years and returned to his ‘home agency’ – many suspect this must be the CIA because any other agency would be named outright. Fool Nelson on Twitter was one of the first to out Ciaramella –

Another Internet sleuth, Greg Rubini, noted that Ciaramella was in the White House at an event and was seated directly behind Melania Trump –

No wonder Adam Schiff doesn’t want this traitor’s name exposed. The suspected whistleblower, Eric Ciaramella, worked with the Obama Administration in the Ukraine, spied on President Trump in the White House for Obama’s CIA and FBI and was apparently doing all he could to sabatoge the Trump White House while he was there.

It’s against the law to spy on our President in an effort to have him impeached. I thought the CIA was not allowed to spy in the US period.

Creepy and corrupt Adam Schiff used the whistleblower’s memo to start his corrupt and criminal impeachment sham investigation taking place in the House. It sure looks like Eric Ciaramella is no hero, he is more likely a traitor and a crook. Hang him high!