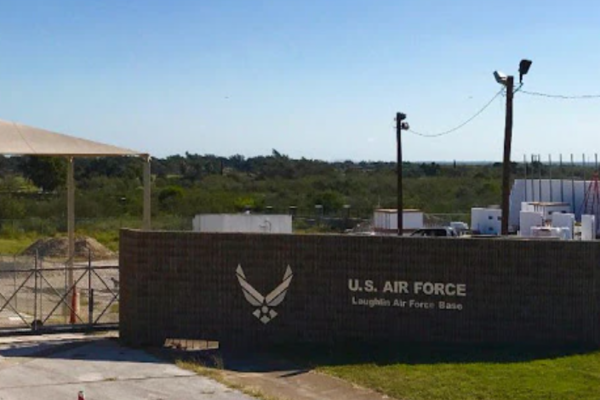 (bigleaguepolitics) – Tucker Carlson reported on his hit show Wednesday night that the US military has been secretly facilitating the transfer of illegal aliens to other parts of the country.

“[We have] confirmed that the Biden administration has enlisted the US military to move illegal immigrants secretly around our country,” said Tucker. “That is happening at Laughlin Air Force Base in [Del Rio,] Texas.”

Tucker revealed a whistleblower-leaked email from Lt. Col. Matthew Burrows to his staff, which reads as follows:

“Over the next few days, weeks or months you may see passenger aircraft on our ramp transporting undocumented non-citizens. Please review the attached public affairs guidance on the issue.

“Do not take photographs and refrain from posting anything on social media. If anyone asks you about it, refer them to public affairs.”

Later in the show, Tucker returned from a commercial break to announce that ICE confirmed the flights of illegal aliens from Laughlin. ICE provided Tucker a written statement that he read on air:

“On June 17, 2021, a memorandum of agreement (MOA) between DHS and DOD was signed by all parties and finalized. On June 29, 2021, ICE Air Operations utilized Laughlin Air Force Base for the first time pursuant to the MOA to transport non-citizens from CBP custody to ICE custody.

“Since June 29, approximately 780 non-citizens were transferred via ICE Air on six ICE Air flights departing from the military installation.

“Collaboration with federal partners enables ICE to transfer non-citizens safely and humanely to ICE field offices, where the appropriate level of custody and supervision will be determined. ICE Air conducts southwest border flights which involve the transfer of migrants from CBP custody to ICE custody.”

Tucker then pointed out that many questions still remain. He asked if the government is using more military resources than just Laughlin Air Force Base, as well as where the transferred illegal aliens end up after ICE has processed them.

“Into what communities were they placed? How many federal dollars were spent doing this? Did the people into whose neighborhoods they were placed have any say in it at all? And what’s the total number?” Tucker wondered aloud.

Perhaps some of those questions will be answered in the coming days after further investigation and inquiry. Stay tuned.