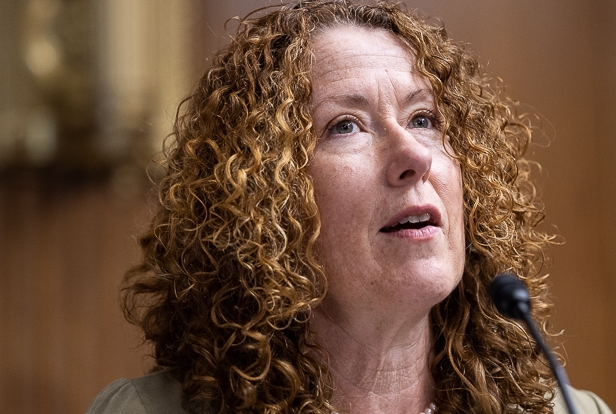 (breitbart) – Tracy Stone-Manning, President Joe Biden’s nominee to be director of the Bureau of Land Management (BLM), described American children as an “environmental hazard” while advocating for slowing U.S. population growth in her 1992 graduate thesis.

The Daily Caller reported on Stone-Manning’s thesis, titled “Into the Heart of the Beast| A case for environmental advertising,” after which she was awarded a master of science degree in environmental studies. Her thesis, however, amounted to public policy recommendations for the University of Montana described as “environmental education.”

Stone-Manning called for an advertising campaign to lessen procreation among Americans, ostensibly towards “environmental” ends. She produced a sample poster deriding a shirtless child as an “environmental hazard.”

Her political advertisement asked in its header, “Can you spot the environmental hazard in this photo?” It included the following response:

That’s right, it’s the cute baby. Americans believe that overpopulation is only a problem somewhere else in the world. But it’s a problem here too.”

The earth is only so big, and we can tap into it only so often. In America, we tap in often and hard.

We breed more than any other industrialized nation. At the same time, we suck up one-third of the world’s energy.

On average, each of us gobbles the same energy as 3 Japanese, 13 Chinese, and 499 Ethiopians. When we overpopulate, the earth notices it more. Stop at two. It could be the best thing you do for the planet.

Biden’s nominee to head the BLM also composed a script for a 30-second video commercial to discourage American families from having more than “one or two” children. A female voiceover for the advertisement reads, “When we [Americans] have children, the planet feels it more. Do the truly smart thing. Stop at one or two kids.”

Her thesis claimed, “The origin of our abuses is us. If there were fewer of us, we would have less impact.”

The Daily Caller highlighted Stone-Manning’s description of “overpopulation” as “the root of many of our environmental horrors.” The planet cannot sustain more Americans, she said of the purpose of her proposed advertising campaign.

She wrote of her recommended campaign, “The point is a simple one. Harshly, the ads say that the earth can’t afford Americans. More softly, they ask people to think about how their family planning choices affect the planet.”

Stone-Manning has already come under fire in recent weeks for her connection to a tree spiking incident – an ecoterrorism tactic – in Idaho in the 1980s, where she traded her court testimony for legal immunity.

In 1993, Stone-Manning was granted immunity in exchange for her testimony that she retyped and sent an anonymous letter to the U.S. Forest Service on behalf of John P. Blount, her former roommate and friend, Fox News previously reported.

Tree spiking “involves inserting metal or ceramic rods into trunks so they can’t be safely cut down, and the tactic has sometimes been used to halt timber sales,” explained the New York Post. The tactic can injure or kill loggers.