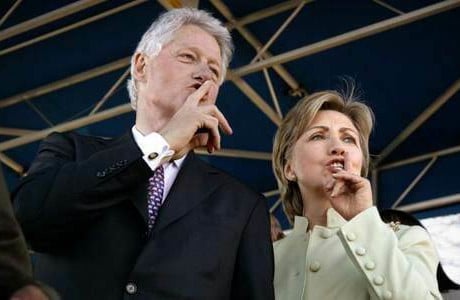 (Gateway Pundit) – In July investigative reporter Conchita Sarnoff, the author of “Trafficking” on the Jeffrey Epstein case, joined Shannon Bream on FOX News and said Bill Clinton flew on Epstein’s plane 27 times and ALMOST EVERY TIME that Clinton was on the plane there were underage girls on the plane.

Sarnoff also said Bill Clinton was lying about his flights with Jeffrey Epstein.

Conchita Sarnoff spoke with Sean Stone on Russia Today about her book “Trafficking” back in April 2016.

Epstein was given only 13 months in prison instead of the minimum 20 years given to other child sex perpetrators.

Sarnoff told RT the abused girls were all under the age of 16-years-old. Sarnoff then read from her book on victim Virginia Roberts who told the judge during court proceedings that Epstein had several prominent clients.

Sarnoff read this part from her book,

“Towards the end of that testimony he asked her about former President Bill Clinton. And she says that there, that there was sexual conduct and foreplay and there was a bed on Epstein’s jet. And she goes on to say what they did and then when Scarola (attorney for victims) asked her, “When you say here what do you mean?”… She placed former president Clinton on the island where Jeffrey Epstein has his residence.

Sarnoff continued to read from her book and the victim’s testimony, “And then the attorney asks her, “Were all of you staying at Jeffrey’s house on the island including Bill Clinton?” And she responds, “That is correct.”

This was a devastating interview!

Notice that this was in April 2016 when Conchita Sarnoff was interviewed on Bill Clinton’s ties to Jeffrey Epstein.

The liberal media never reported on this during the 2016 election.

An ABC News insider leaked the shelved video of “Good Morning America” co-host Amy Robach on a hot mic explaining how her network spiked an investigative report on Jeffrey Epstein, “the most prolific pedophile of our time.”

• “I’ve Had This Story for Three Years… (ABC) Would Not Put It on The Air” says Good Morning America Breaking News Anchor, and 20/20 Co-Anchor Amy Robach. “It Was Unbelievable… We Had – Clinton, We Had Everything…”

• Robach: “We Had Her Whole Allegations About Prince Andrew…I Got a Little Concerned About Why I Couldn’t Get On.”

• Robach Details ABC’s Initial Response to Her: “Who’s Jeffrey Epstein? No One Knows Who That is. This is a Stupid Story.”

In the video taken earlier this year Amy Robach says Epstein’s death was not a suicide.

Here is the video via Project Veritas:

Amy Robach said the story was spiked three years ago.

She made the comments weeks ago.

Back three years ago the US presidential campaign was hot and heavy.

And Hillary Clinton was the Democrat Party candidate.

The liberal media can never be trusted.